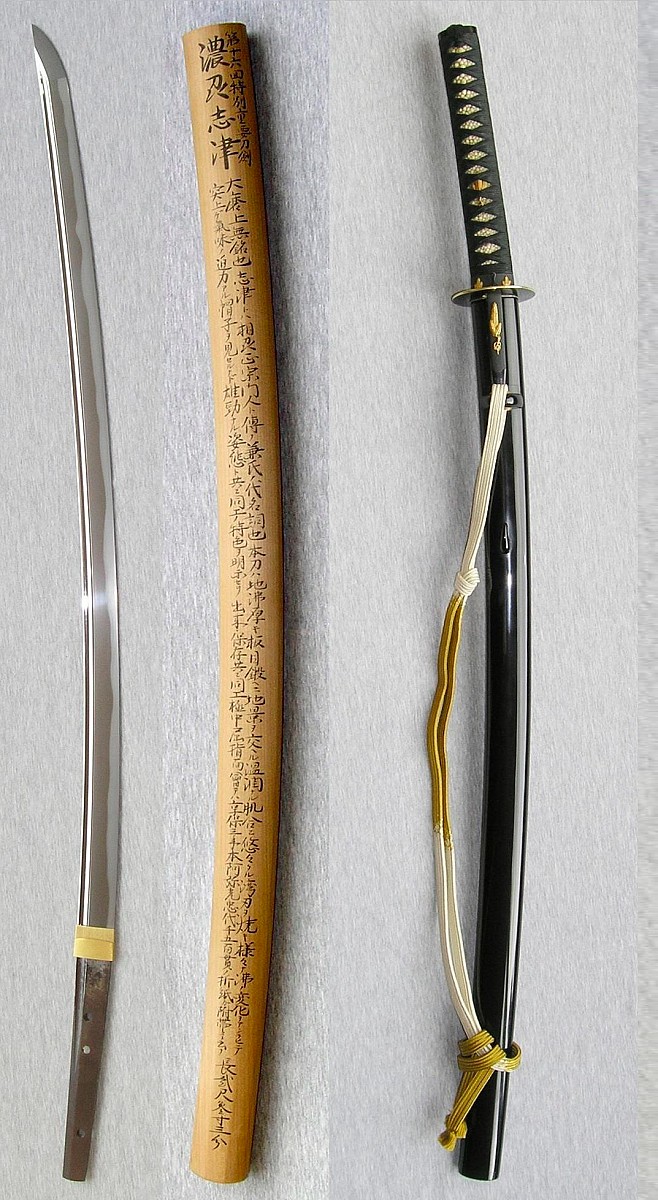 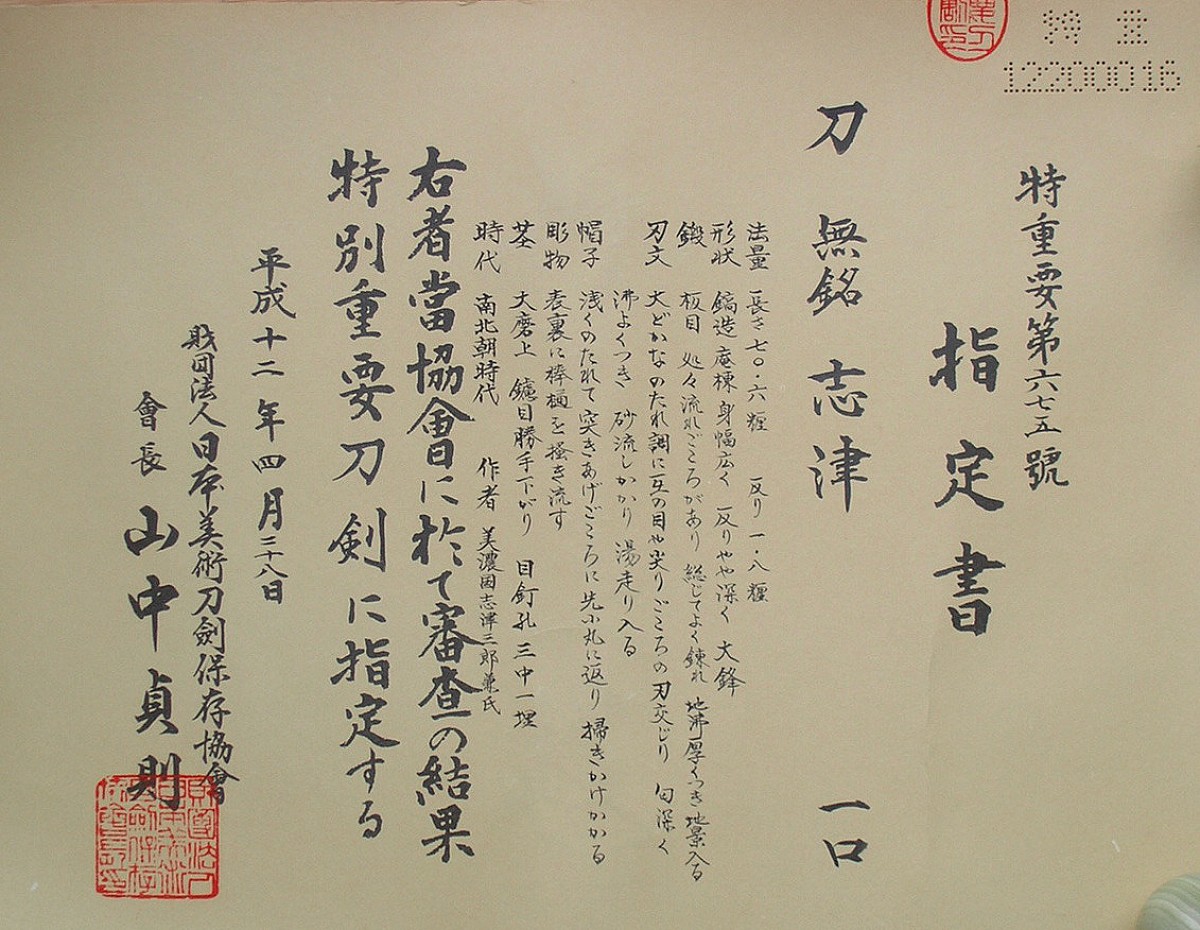 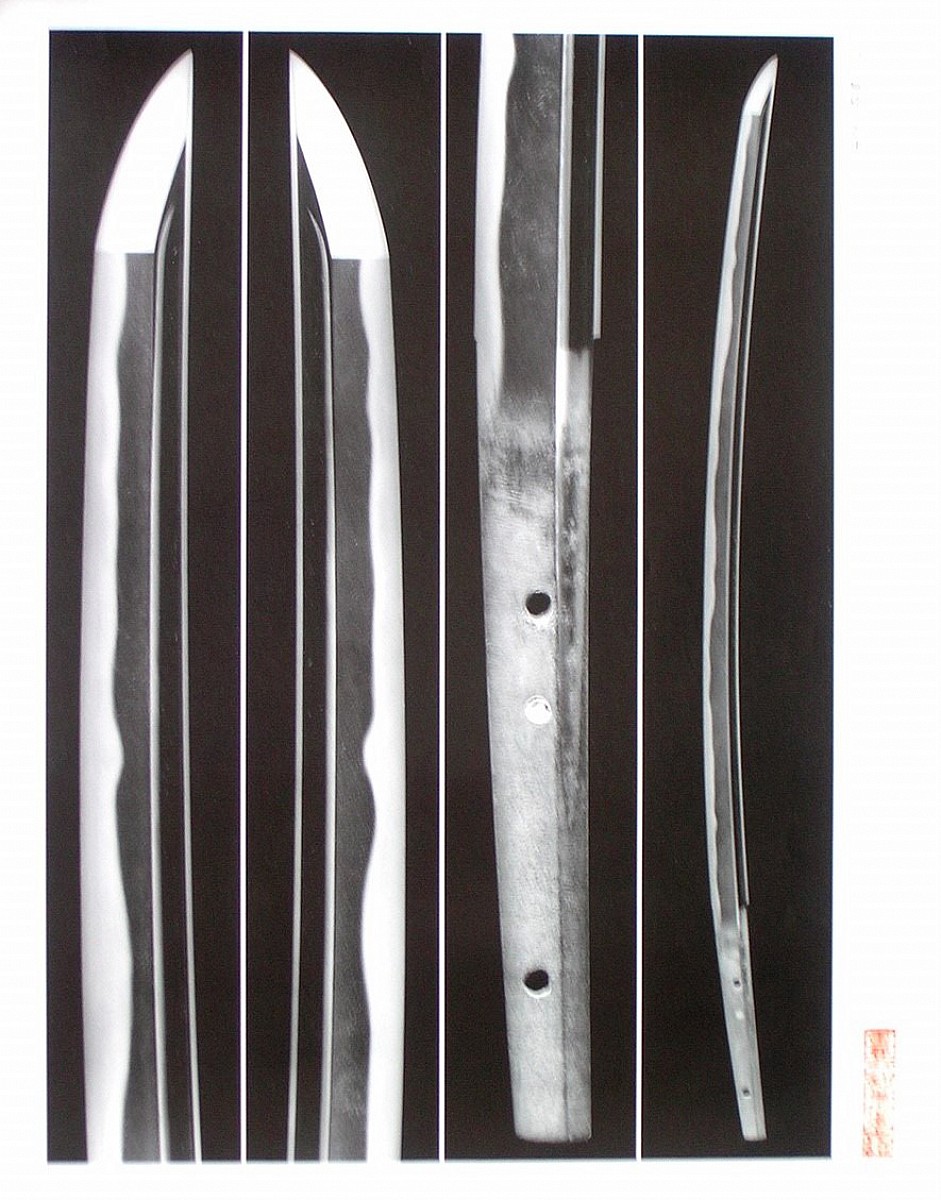 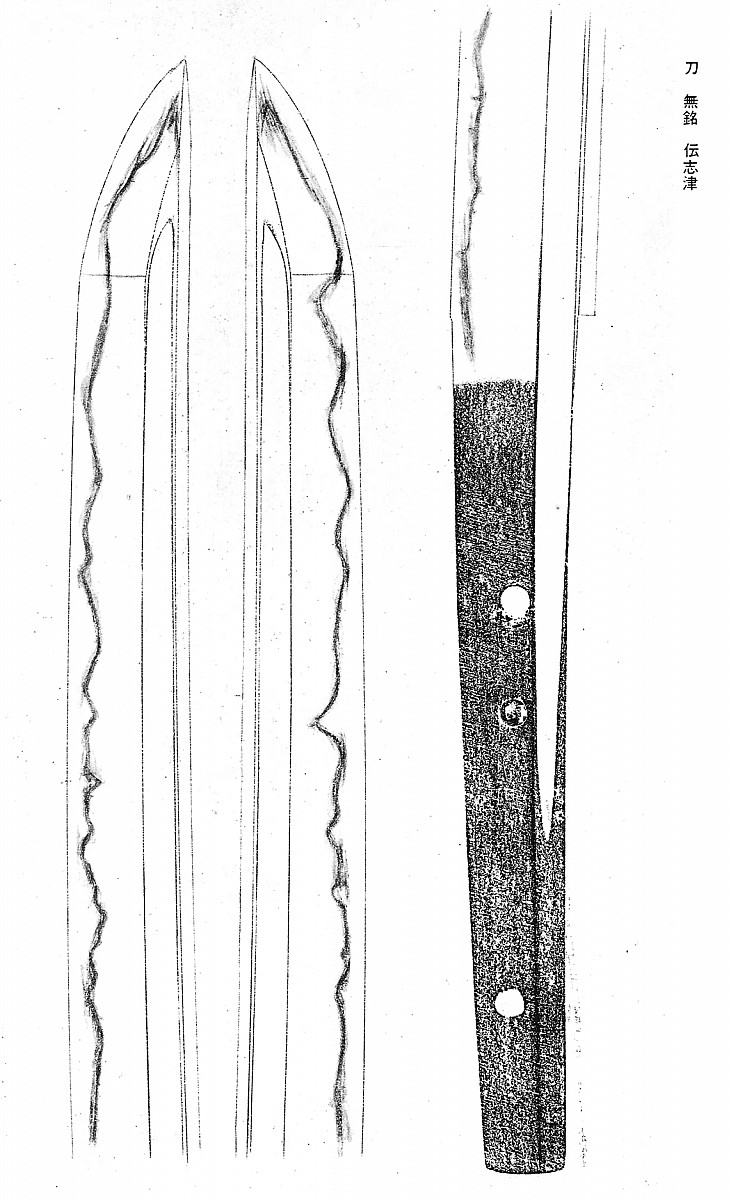 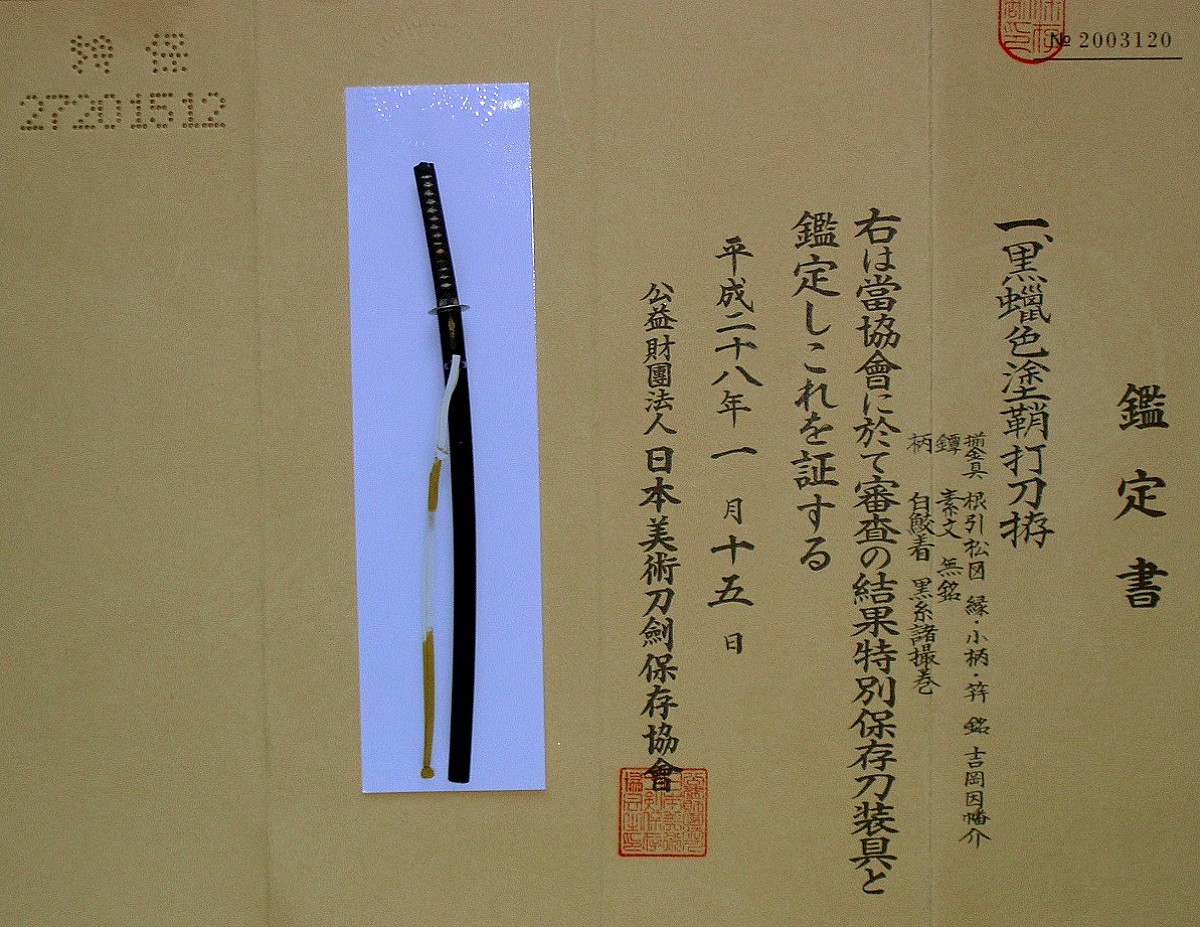 Designated as Tokubetsu Jūyō Tōken at the 16th tokubets-jūyō-shinsa held on the 28th of April 1999. 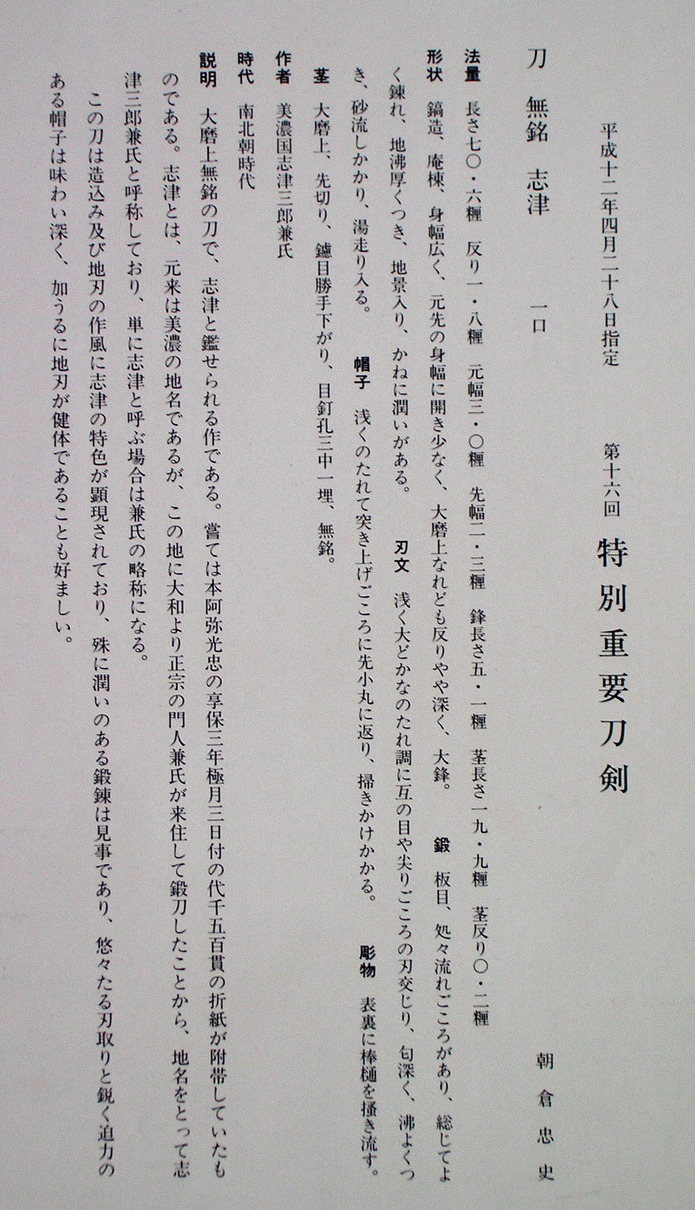 Designated as Tokubetsu Jūyō-tōken at the 16th tokubetsu jūyō-shinsa held on the 28th April, 1999.

Sugata: the blade is in shinogi-zukuri with iori-mune and has wide mihaba, no noticeable taper, despite the o-suriage still a rather deep sori, and o-kissaki.

Horimono: on both sides a bo-hi that runs with kaki-nagashi into the tang.

Explanation: This is an o-suriage mumei katana that is attributed to Shizu and came once with an origami by Hon’ami Kochu from the third day of the 12th month Kyoho 3rd year (1718) that gave it a value of 1'500 kan. Shizu is normally a place name in Mino province but as the Yamato smith Saburo Kaneuji settled after studying under Masamune, it was applied to him and he is therefore referred to as Shizu Saburo Kaneuji. In this sense, Shizu can be an abbreviation to refer to Kaneuji.

This katana shows in terms of shape and interpretation of the jiba very well the characteristics of Shizu and the forging quality of the steel with the «wet steel» effect look is magnificent. Highly tasteful is the combination of a rather calm course of the ha with a sharp and powerful looking bōshi. And the blade is on top of that kenzen, i.e. in perfect health and condition.

Sayagaki translation: Designated as Tokubetsu Jūyō-tōken at the 16th tokubetsu jūyō-shinsa.Nōshū Shizu. The blade is o-suriage and mumei. Shizu was a student of Sōshū Masamune and the name is a synonym for Kaneuji. The blade shows «wet steel» effect; kitae in itame with plenty of ji-nie that is mixed with chikei and a calm hardening in notare-ba with various; vivid nie-hataraki. This and the late starting, strong bōshi are, as well as the powerful sugata, characteristic features of this smith and with the present condition, we have here one of the best works that are attributed to Shizu. In addition, the blade came once with an origami by Hon’ami Kōchu from the 3rd year of the Kyōhō era (1718) that gave it a value of 1'500 kan. Nagasa – 70.60 cm. Tanzan Hendo (pseudonym of Tanobe Michihiro) inscribed this sayagaki in November of the year of the Sheep of this era (2015).

It can be said that this katana is a highly estimated work of Kaneuji amongst mumei Kaneuji swords. The blade is in excellent condition with no flows.