31 october 2019
The one of the six so-called Awataguchi brothers and one of the most brilliant representatives of the Awataguchi School. 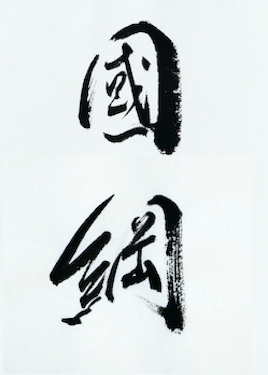 It is generally assumed that the Sagami School was established by three smiths: Awataguchi Kunitsuna, Ichimonji Sukezane, and Bizen Saburō Kunimune. They are considered its forerunners, although they manufactured no swords in the pure Sagami style.

The Kotō Meizukushi Taizen tells us that Awataguchi Kunitsuna (粟田口国綱) was born in the 1st year of the Chōkan era (⾧寛, 1163) and died in the 7th year of the Kenchō era (建⾧, 1255) at the age of 93. When Kunitsuna was 42 years old (it would mean in 1205), he traveled to Yamanouchi area of Sōshū province at the invitation of Hōjō Tokomasa.

It can be noted that the dates of Kunitsuna’s visits to Kamakura, indicated by old manuscripts differ from each other by almost 50 years. Most likely, we would talk about the his first invitation and visit to Kamakura on behalf of Tokimasa. Tokimasa was the very first Hōjō clan regent, held this post for less than two years and was surely busy with getting established the shikken regency of his clan. Most likely, he was unable to ensure proper protection for Kunitsuna’s activity. This would mean that he was working for Tokimasa short time only and returned to Kyōto after.

Tokiyori was one of the most renowned sword connoisseurs of his time and he didn’t randomly recruit sword-smiths but selected the greatest masters of his time, for example also Saburō Kunimune and Ichimonji Sukezane from Bizen Province, and it is assumed that he as sword expert and key political figure of Kamakura not only wanted to have superior cutters but blades that would impress his circles on the basis of their aesthetician appearance. The Awataguchi school was most famous and powerful smithing school during the Kenchō era. Thus it is possible that Tokiyori invited the 85th years old master Kunitsuna to Kamakura for leading a group of local smiths and establishing new center for swordsmithing art.

It is said that ōdachi (nagasa is 114.5 cm) from the former possessions of the Uesugi (上杉) family could be regarded as kind of proof of Kunitsuna being in Kamakura around the Kenchō era but the whereabouts of the blade are unfortunately unknown now (most likely, it have been lost since the end of the WWII). The mei of the blade reads as “Kamakura-jū Tōroku Sakon Kunitsuna” (鎌倉住藤六左近国綱) and the date as “a day in the eighth month of 1253” (建⾧五年⼋⽉⽇). The records of the Uesugi claim that this ōdachi was made by Kunitsuna at the same time he made the “Onimaru” for Hōjō Tokiyori and that it was handed down within the family since the old times.

As described in a legend, the name “Onimaru” was given to the sword, made by Kunitsuna, after a well-known incident. Ones Tokiyori was afflicted by a mysterious “disease” – a small demon appeared every night in his bed-chamber – he dreamt of an old man who said to him: „I am your sword made by Kunitsuna. Someone touched me with dirty hands and I can’t be drawn out of my scabbard now, because I am so rusty. When you want to get rid off this demon, you should quickly clean me out from the rust.“ Right at the next morning Tokiyori cleaned the blade and stored it at its rack, but as if by magic the sword moved by itself, slid out of its scabbard, and cut off a foot of the nearby brazier. This foot was made of silver and shaped like a demon. From that day onwards Tokiyori was never again cursed by the small demon and so he gave the blade the name “Onimaru Kunitsuna”.

This sword became a one of the treasure item of the Hōjō family. It is assumed that the “Onimaru Kunitsuna” came over this way later in the possession of the Ashikaga family. This sword owned by the Imperial Household Agency now, along with “Ōtenta Mitsuyo” and “Futatsu-mei Norimune” was considered to be one of the three regalia swords of the shoguns of the Ashikaga clan. 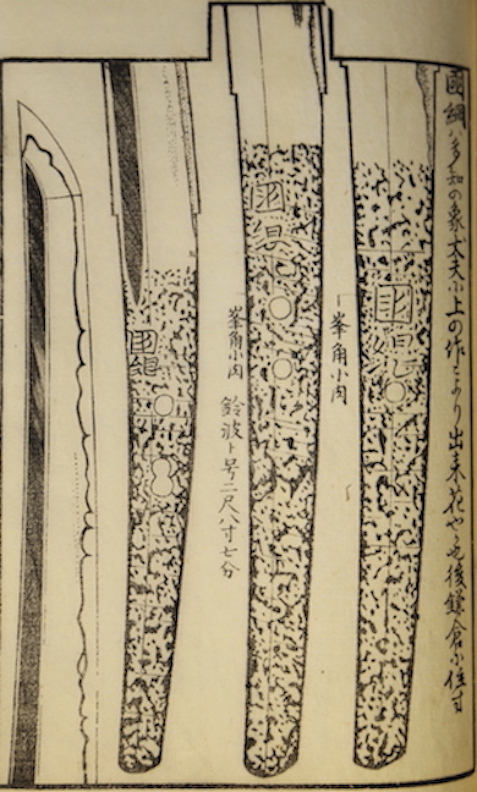 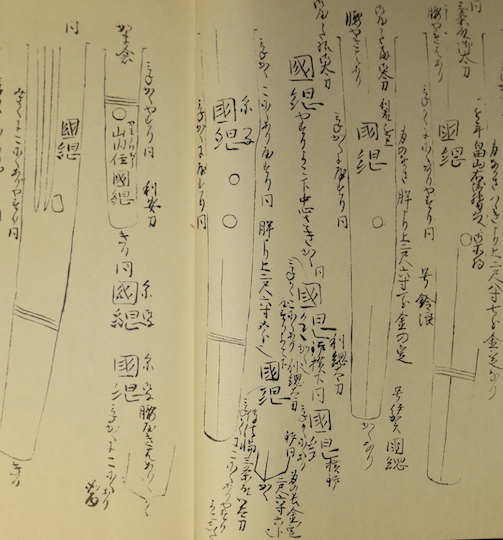 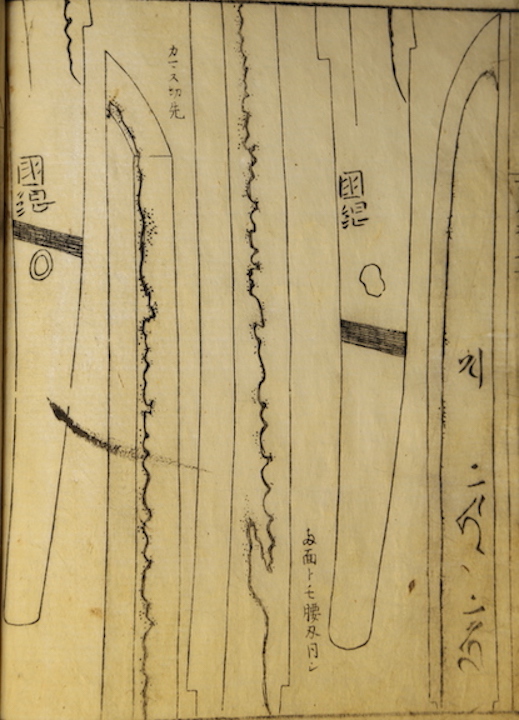 This is interesting as some of old manuscripts marks that Kunitsuna chiselled his signature using alternative variant of the kanji "tsuna". Kunitsuna used simplified variant 縄 instead of 繩. Very rarely in old books one can find an explanation and an indication of this phenomenon. 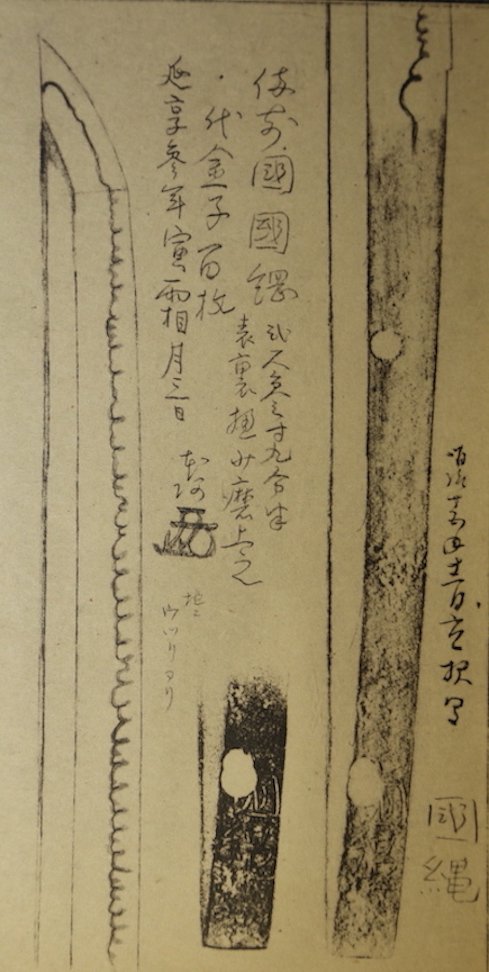 Kunitsuna was also one of the Oki-goban-kaji (隠岐御番鍛冶) for the fifth and sixth month. Oki-goban-kaji is a register that included the names of the twelve smiths who replaced one another to cover each month of the year, while working to create an ideal sword. The smiths were invited by ex-emperor Gotoba (後鳥羽天皇, 1180-1239) to his exile on the island of Oki.

Kunitsuna moved in his later years to Kamakura where he settled in Yamanouchi (山内) and made ko-wakizashi which are hardened in suguha and without a koshiba. The Kotō Meizukushi Taizen tells us that Sanekuni (真國, was disciple of Kunitsuna) lived in Yamanouchi around the Kōan era (弘安, 1278-1288). Sanekuni signed as Kunitsuna later and secretly made daimei and daisaku mei in place of the teacher. This is why works with Kunitsuna’s signatures stretch across such a long period of Japanese history.

One of the most common points of view in contemporary literature is that Awataguchi Kunitsuna was a father and a teacher of Shintōgo Kunimitsu (新藤五国光), that is rightfully considered the founder of the Sōshū School. Shintōgo was born during Kunitsuna’s old age (at the age of 87). The Kotō Meizukushi Taizen says that Shintōgo was separated from his father at the age of six. 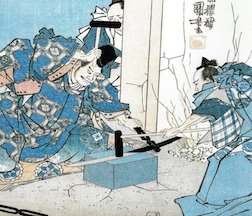 Sugata: There are both slender (elegant) and wide ones, the shinogi is fairly wide and the iori-mune is shallow, kissaki is compact.

Jitetsu: The dense and finely forged masame with ji-nie all over the blade and a ko-midare in ko-nie-deki. The colour of steel is blueish. Also hotsure appear which spill or phase out into the ji, sometimes even like a rainbow, a feature that is hardly seen at any other smiths but which is difficult to describe.

Hamon: The hamon is ko-midare, chōji-midare, suguba and there era some swords that are tempered with a koshiba (it usually measures about 1 or 2 sun (3 ~ 6 cm) and starts with a narrow yakidashi). Ko-nie are fukai, nioiguchi line is wide, there are activities of ashi, sunagashi, inazuma and chikey in the ha area. Sometime we could see a wide suguha that is mixed with chōji and ko-midare that also may feature a midareba at the base. Some of his 3 shaku (~ 90 cm) long tachi are hardened for a length of about 1 shaku (~ 30 cm) from the base in midareba and featured chikei.

Nakago: The mune is maru (roundish), the is a small niku in hira area, the tip is kurijiri, the yasurime is yoko or katte-sagari. The niji-mei is chiseled on the shinogi right below of the habaki area. Niji-mei is signed in a somewhat “eccentric” manner which does not follow the usual number of strokes for the characters used (please see illustrated section with examples). 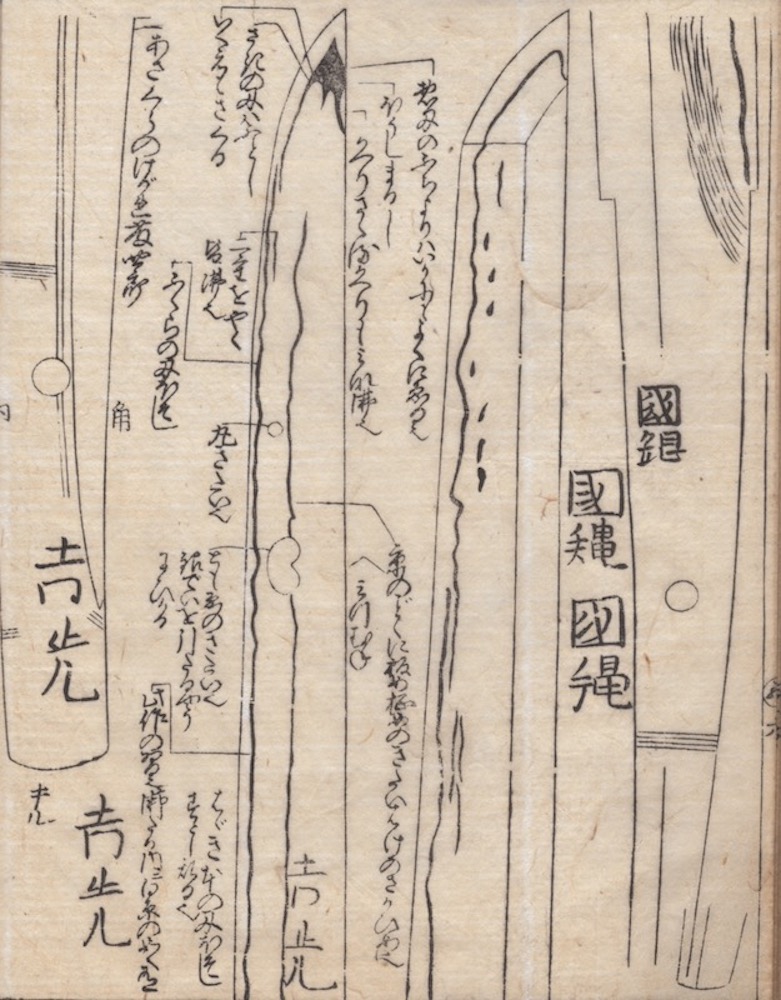 Kuniyasu (国安) - the third son of Kuniie (国家), name at birth Tōsaburō (藤三郎), family name Hayashi (林) and clan name Fujiwara (藤原氏). He was born in the 3d year of the Kyūju era (久寿, 1156). He was one of the Goban Kaji. He was an honoured swordsmith who was entrusted with the responsibility of Yamashiro no Kami.