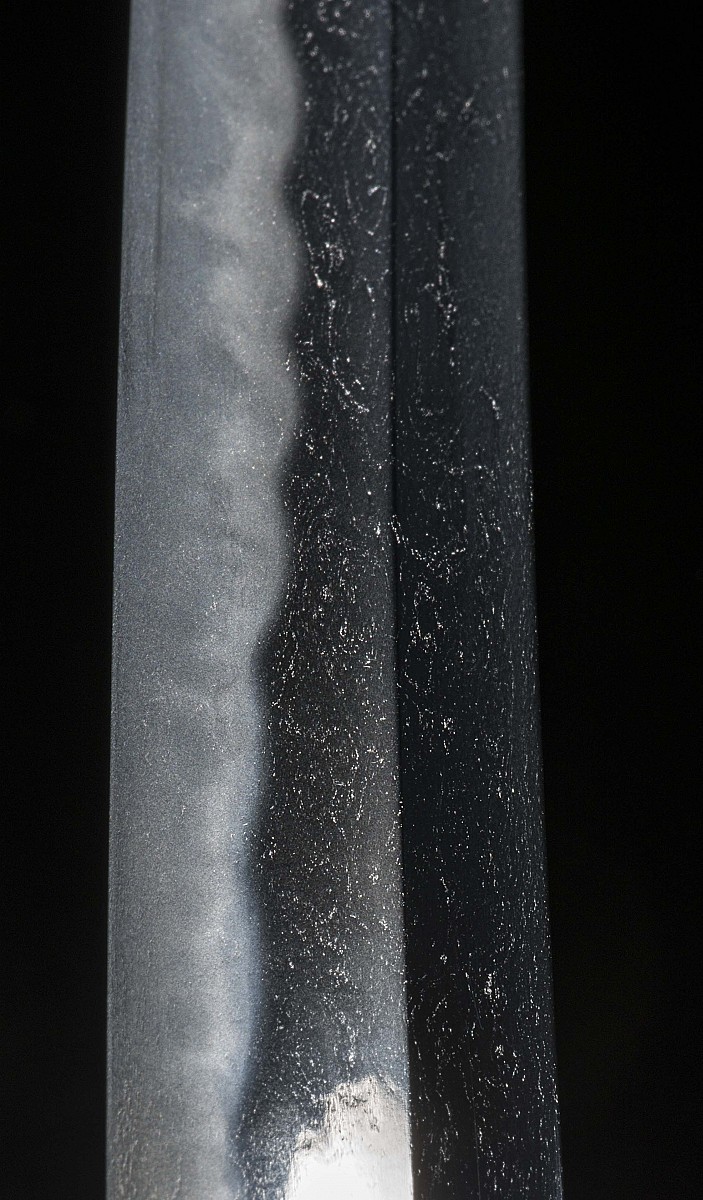 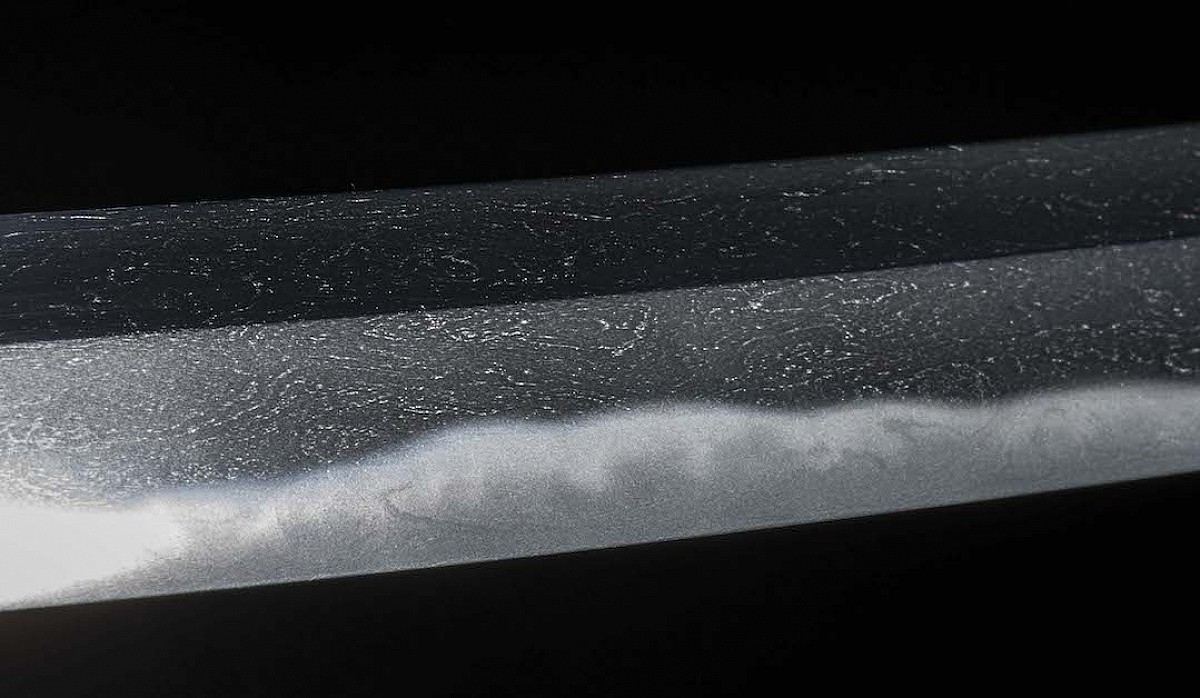 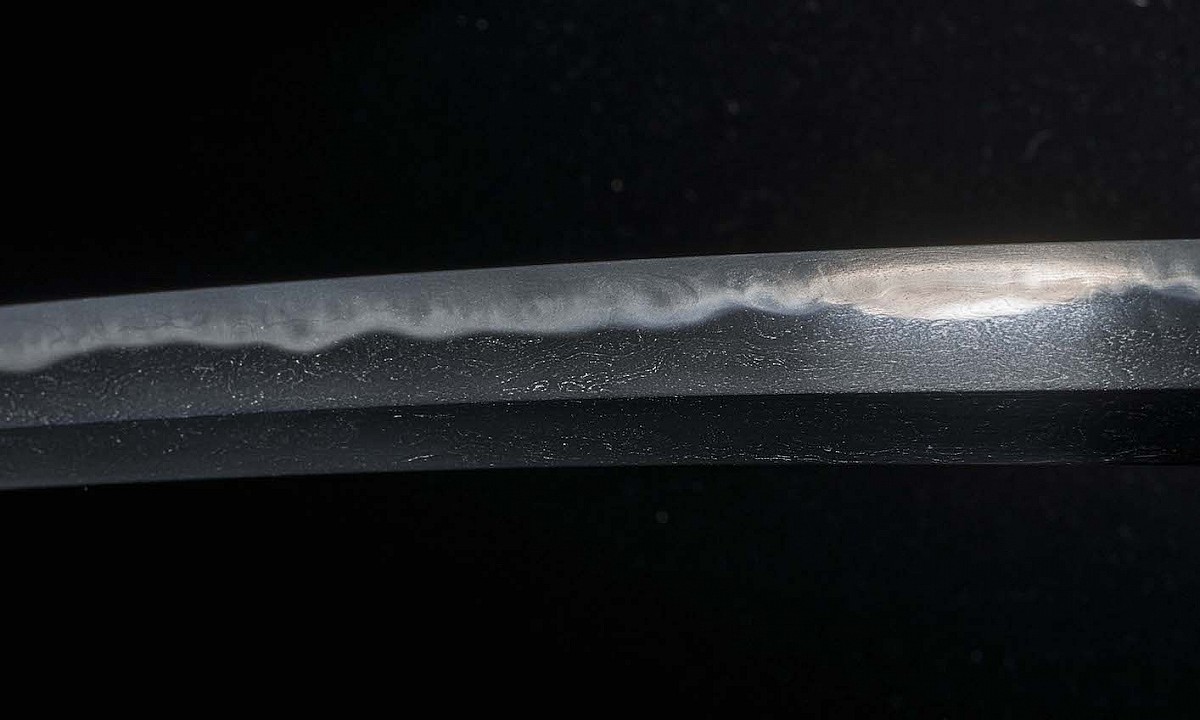 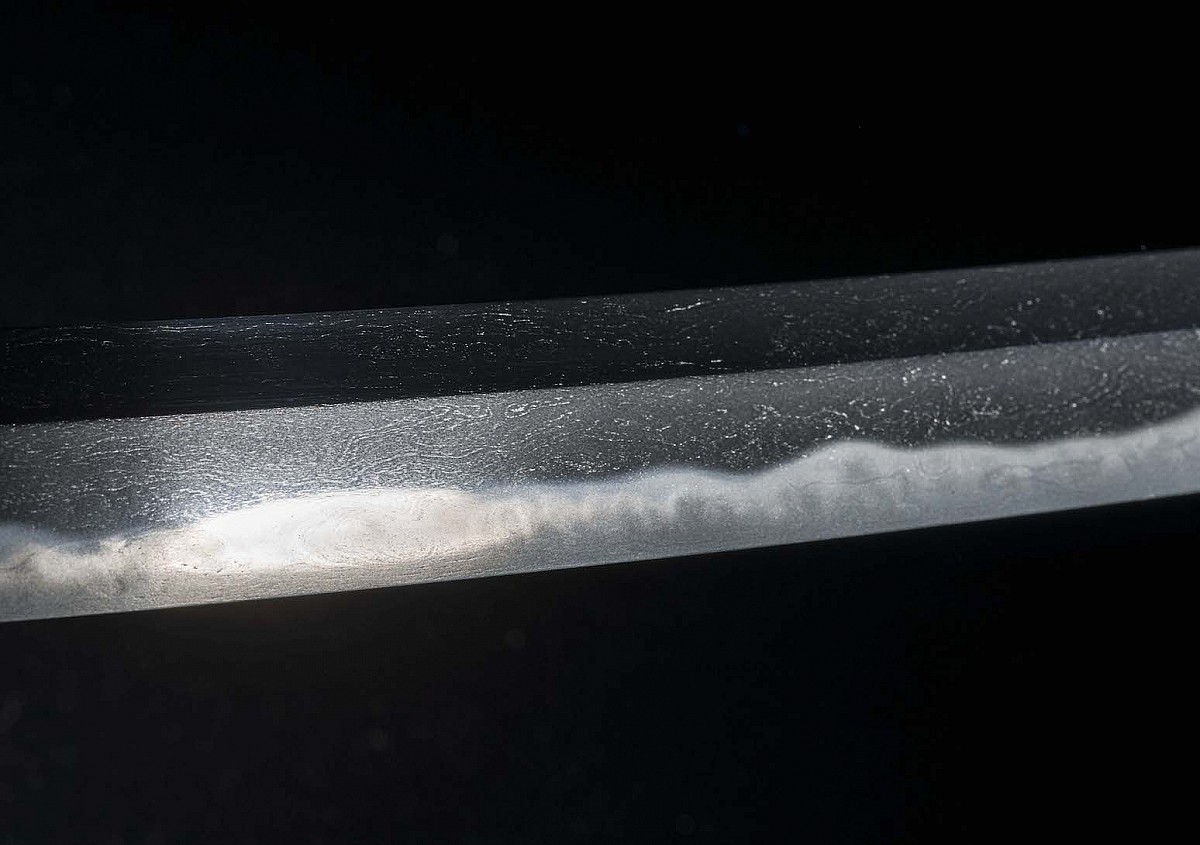 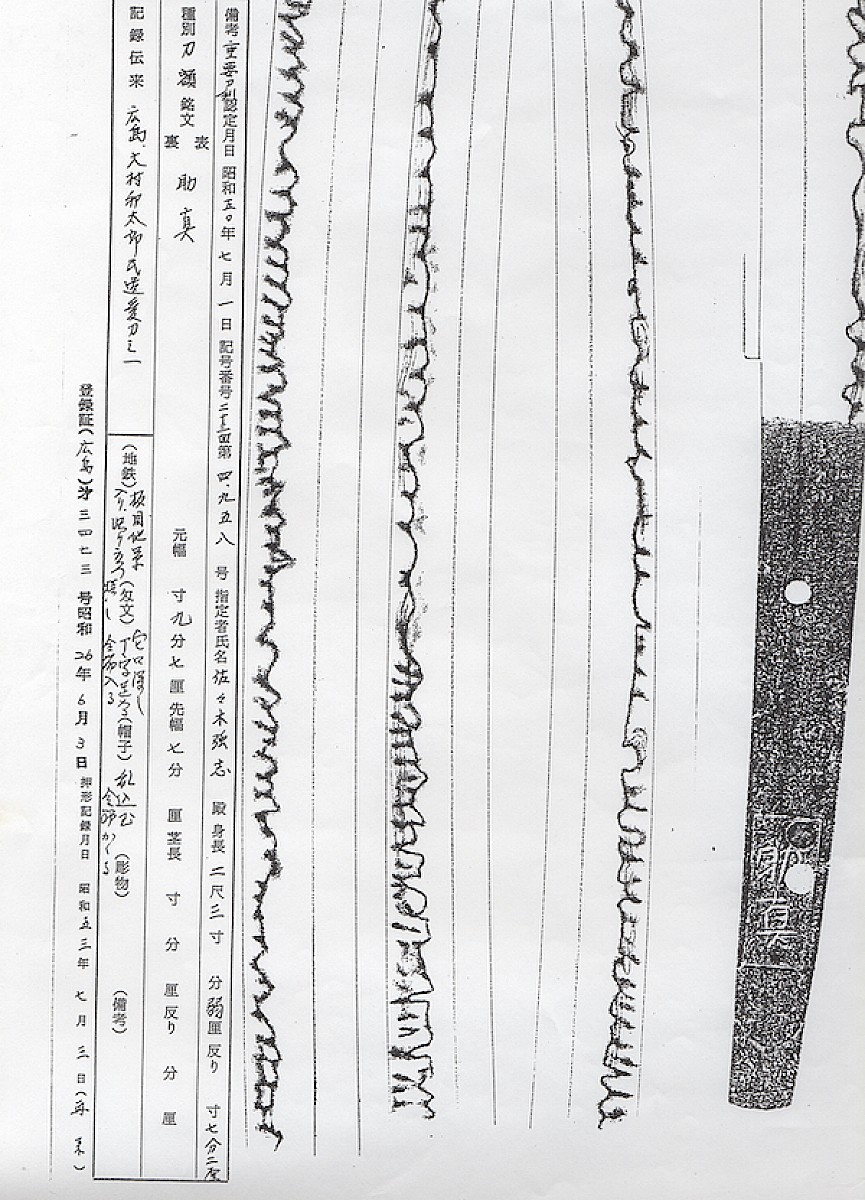 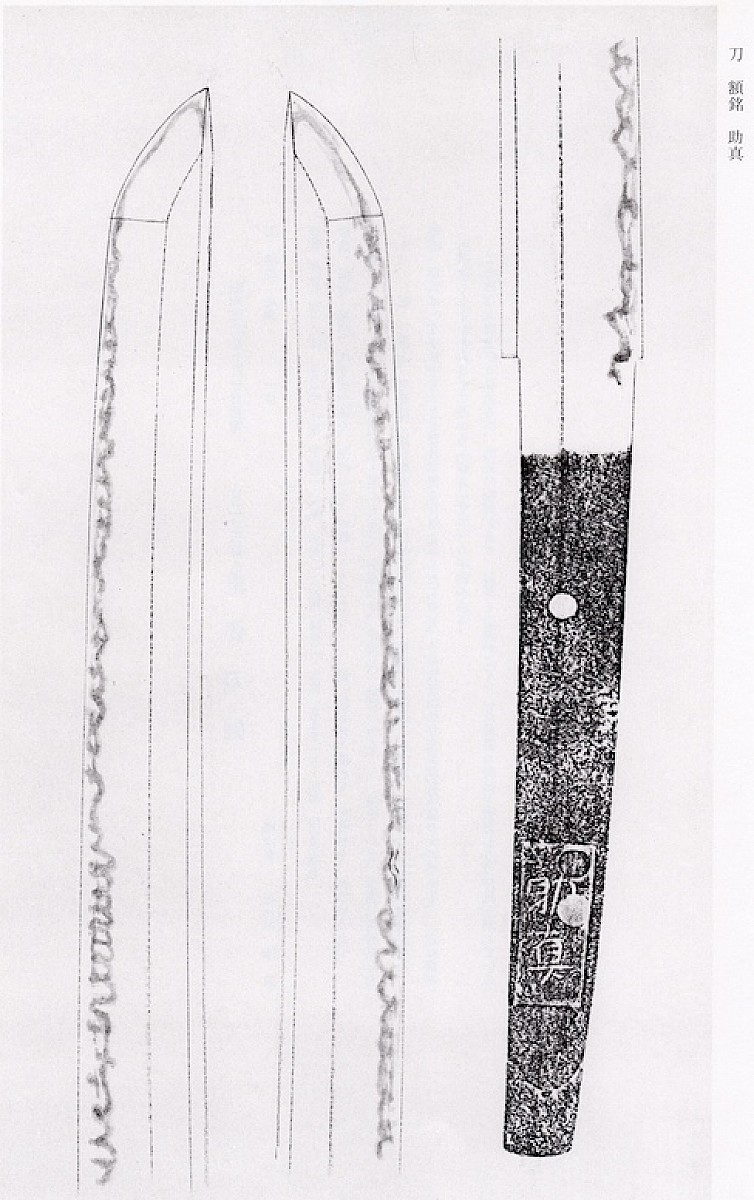 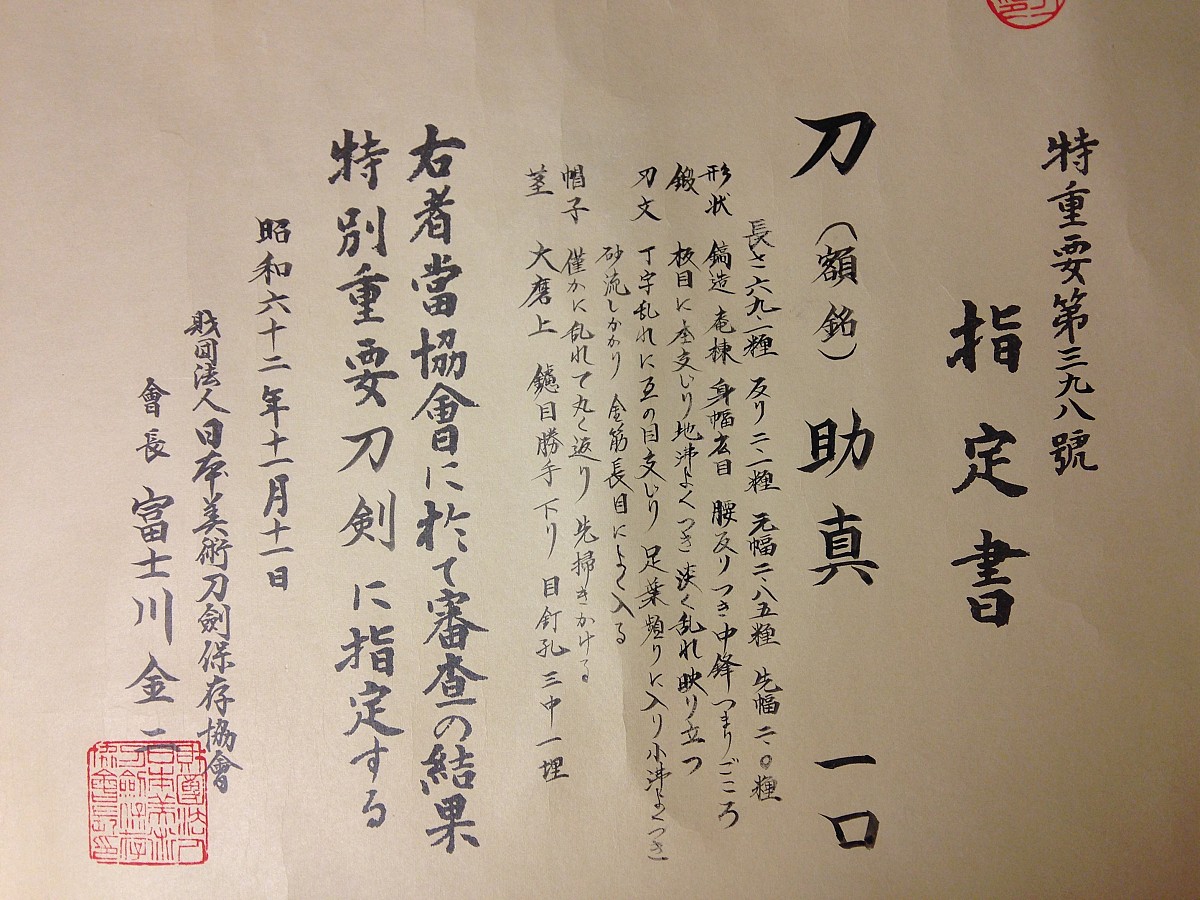 Designated as Tokubetsu Jūyō Tōken at the 10th tokubetsu jūyō-shinsa held on the 11th of November 1987.

Shortened, gaku-mei: Suke Zane. The sword was polished by Hon’ami Nisshū (本阿弥日洲, Ningen Kokuhō); the sayagaki was made by Hon’ami Nisshū in the early spring of 1989 (the translation is given in the Japanese Swords: Sōshū-den Masterpieces book). The sword’s habaki consists of two parts: the outer one is solid gold, and the interior one is a copper alloy wrapped in gold foil. This was the most famous, bestquality sword in the collection of Ōmura Kunitarō (大村邦太郎).

In addition, the sword was at various times owned by Nojima Fukutarō (野島福太郎), Sasaki Tsuyoshi (佐々木強志), Kariyabu Toyosaku (芟藪豊作 —the honorary president of the Japanese Kennel Club, www.jkc.co.jp), Kurokawa Seikichi (黒川精吉 —the owner of virtually one of the best collection today of swords in Japan and the owner of Sokendo), and Frederiсk M. Weissberg (San Francisco, USA, one of the most famous collectors and experts in the United States and the owner of www.nihonto.com).

If you have frequent opportunities to see many swords, you mentally form a certain stereotype of a sword’s average weight, depending on its size. In other words, before taking any sword in hand, you have an intuitive idea of how much it weighs. This sword by Sukezane is a “heavy” one, and its weight differs significantly from the prevailing average parameters. In addition to its appearance and a variety of visual effects in the steel, as well as those created by forging and hardening, this sword has another feature: the steel has an exceptionally high relative density, creating an unusual feeling when you hold it. This sword surely gives you confidence in any actions you might take, because you don’t need to think about whether it is capable of performing the desired task. It not only looks but feels like a sword that is capable of cutting anything. Using this sword as an example, you can see how accurate the old sources are in defining and describing a smith’s forging practices. If you recall Ōmura Kaboku’s description of forging features inherent in Sukezane’s work, which he outlined in his book more than 330 years ago, you can confirm the truth of this theoretical description by the actual feel of the sword in your hands.

This blade is an ideal weapon against a warrior clad in armor, as much as is possible for a sword. Despite this sword being heavy, it is not unwieldy and slow, which is surprising in itself. This was achieved by maintaining the excellent balance of the blade’s geometry, even after a master swordsmith shortened it and apparently gave it a new tang. The master most likely conceived these parameters when shortening the sword for a specific customer, who undoubtedly had a good idea of what he desired in the final product and who was accordingly quite accomplished in its use.

The master’s skill is evidenced by the unusually accurate way he transferred the area with the signature to the remainder of the tang. This is a rare example of a high-quality work in which all elements previously present in the signature area (such as mekugi-ana, soldered using a copper alloy) were carefully preserved. In addition, one should pay attention to the neatly and beautifully executed kurijiri. In itself, the survival of a proper nakago is a very important element for these high-level swords, influencing their value. It is very fortunate in this case that the tang bears a gaku-mei (額銘), which was executed at a highly artistic level, as indicated. 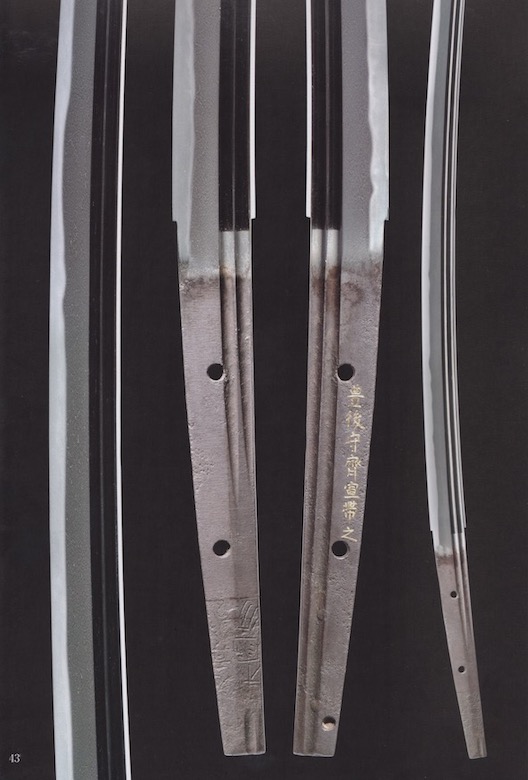 Possibly, if more masters had been able to perform such an operation during the mass sword-shortening process, swords with gaku-mei would have survived until modern times in greater numbers, so, by default, we can state that a gaku-mei on any work by certain smiths is a rarity. Currently, only 81 swords (of the Jūyō category and above) have preserved their signatures by means of the gaku-mei, and in the Tokubetsu Jūyō category, there are only 10 such swords. In addition, there are currently 138 swords (of the Jūyō category and above) with the so-called orikaeshi-mei (折り返し銘), where the area of the nakago with the signature has been processed and bent to the opposite part of the tang. This way of saving the signature, with rare exceptions, does not raise questions about whether the signature belongs to the given sword, but it was suitable only if minimal shortening was required. In addition, this method is much less desirable from an aesthetic point of view. First, the bent part of the signature remains on the other side of nakago, “upside-down”, which caused superstitious owners in the past to doubt whether the master had directed the energy correctly when forging the sword. Second, the vast majority of orikaeshi-mei (with rare exceptions) simply disfigured the tang, because this process made it difficult to maintain the shape of the tip and avoid unnecessary thickening.

Using this sword as an example, you can also see that between two possible methods of preserving the master’s signature when shortening the sword—gakumei and orikaeshi-mei—the first one is best in terms of aesthetics and in preserving the nature of the sword, and the second one is a more reliable way to judge whether a signature does indeed belong to a particular sword. In addition, the history of smithing in Japan has recorded certain cases (excluding obvious forgeries) where the master’s signature on a sword was lost, and his signature was transferred to that sword from another sword, sometimes one of a different category (for example, a signature taken from a wakizashi was transferred to a tachi). An example of this is the well-known Sōshū Hiromitsu sword with gaku-mei, described by Honma Junji in Sōshū Den Meisaku Shū on p. 23. Regarding this sword, modern experts are of the opinion that the signature on the sword is authentic, like the sword itself, but that it was transferred from another sword, a ko-wakizashi by Hiromitsu.

(excerpt from Chapter 1, pp.12-25, of the Japanese Swo﻿rds: Sōshū-den Masterpieces )