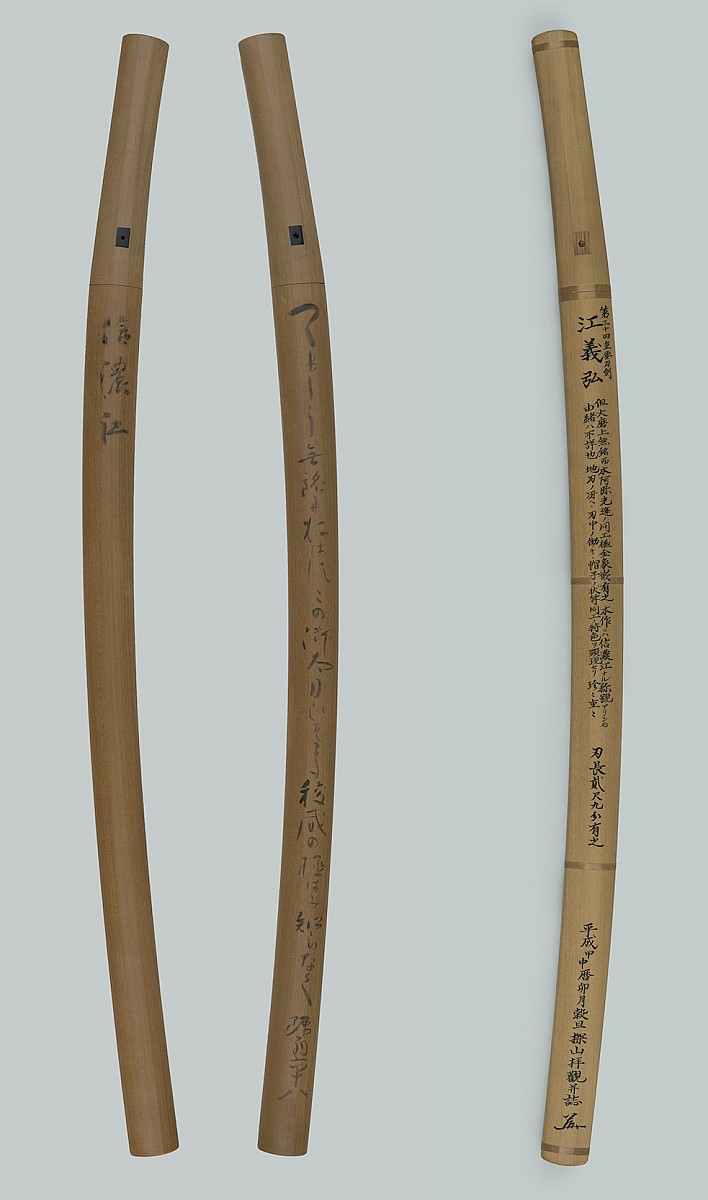 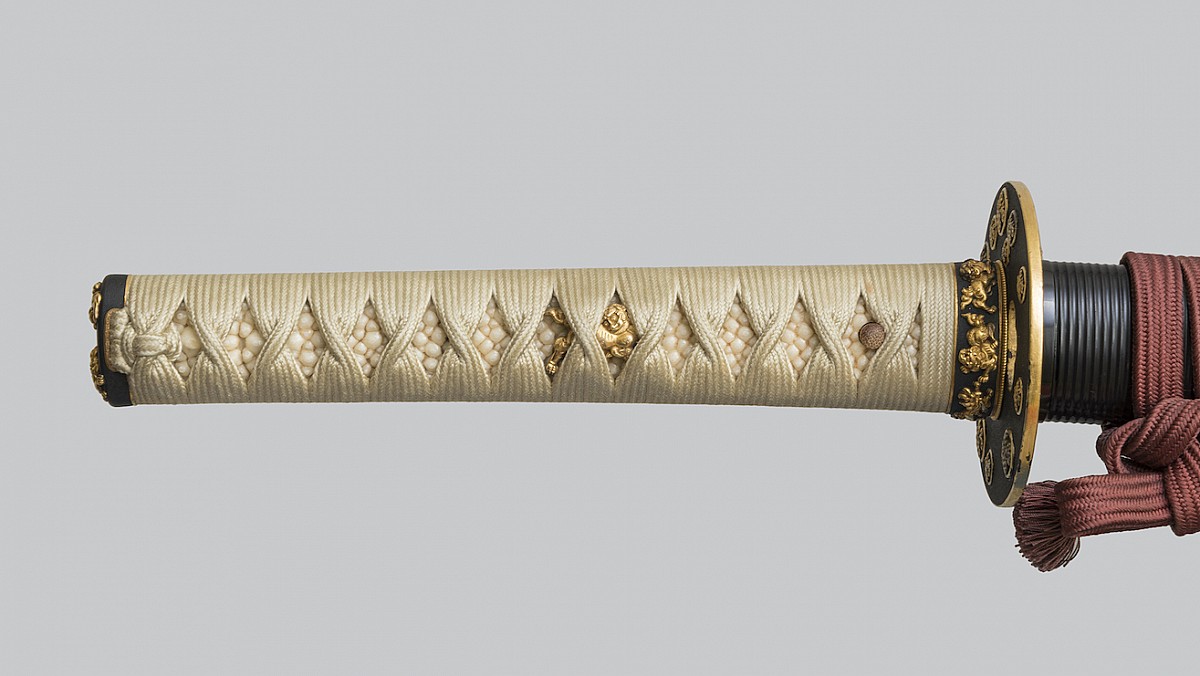 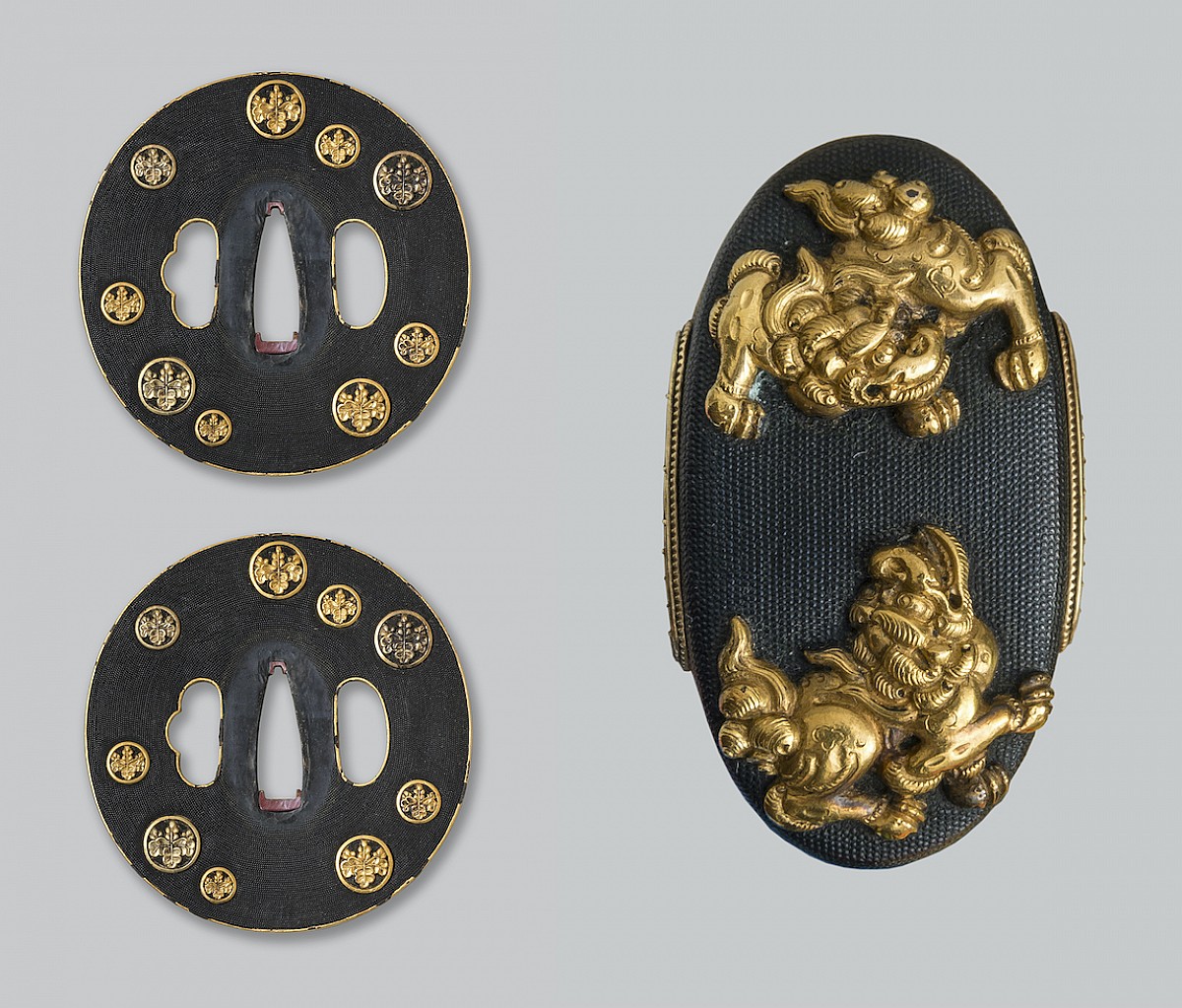 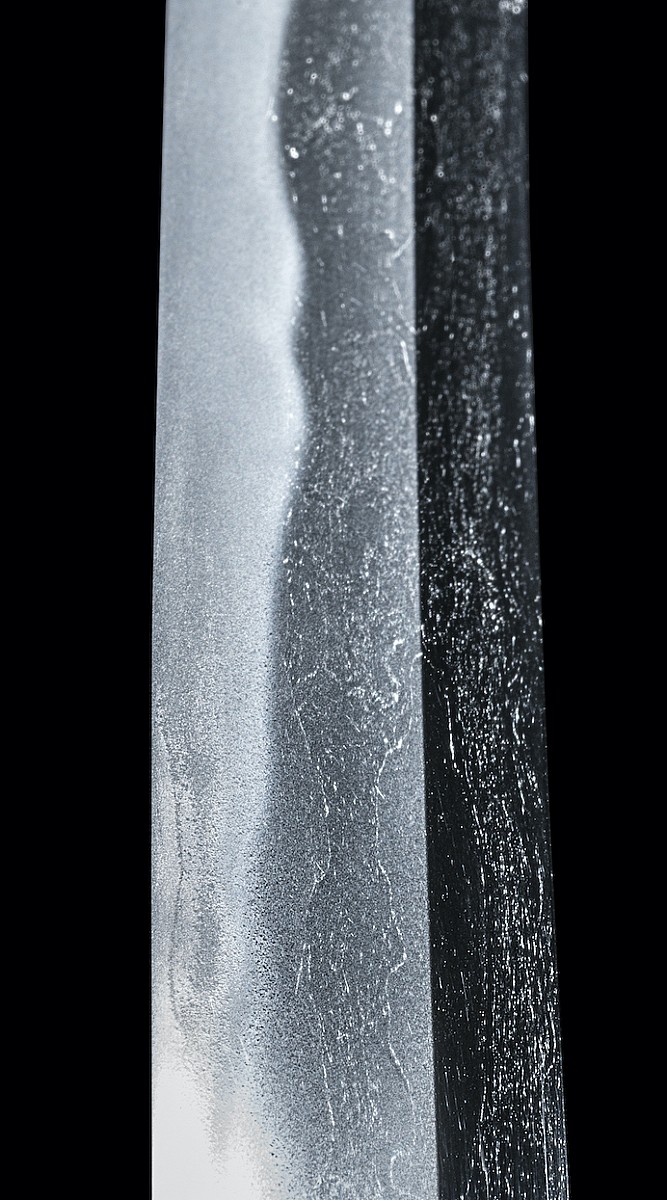 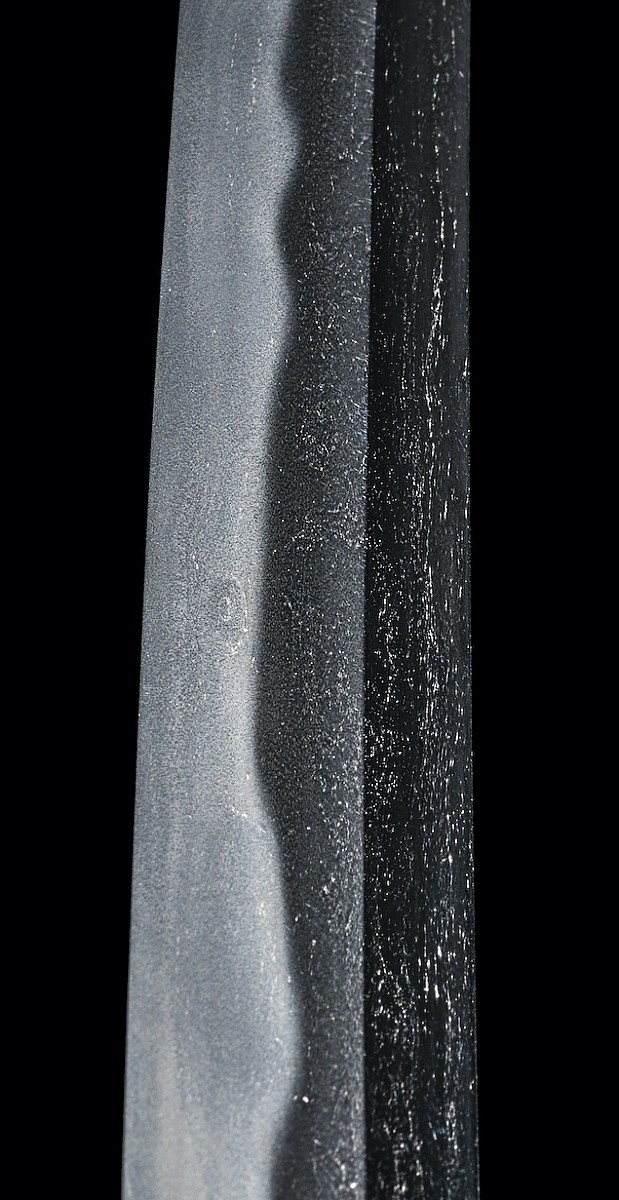 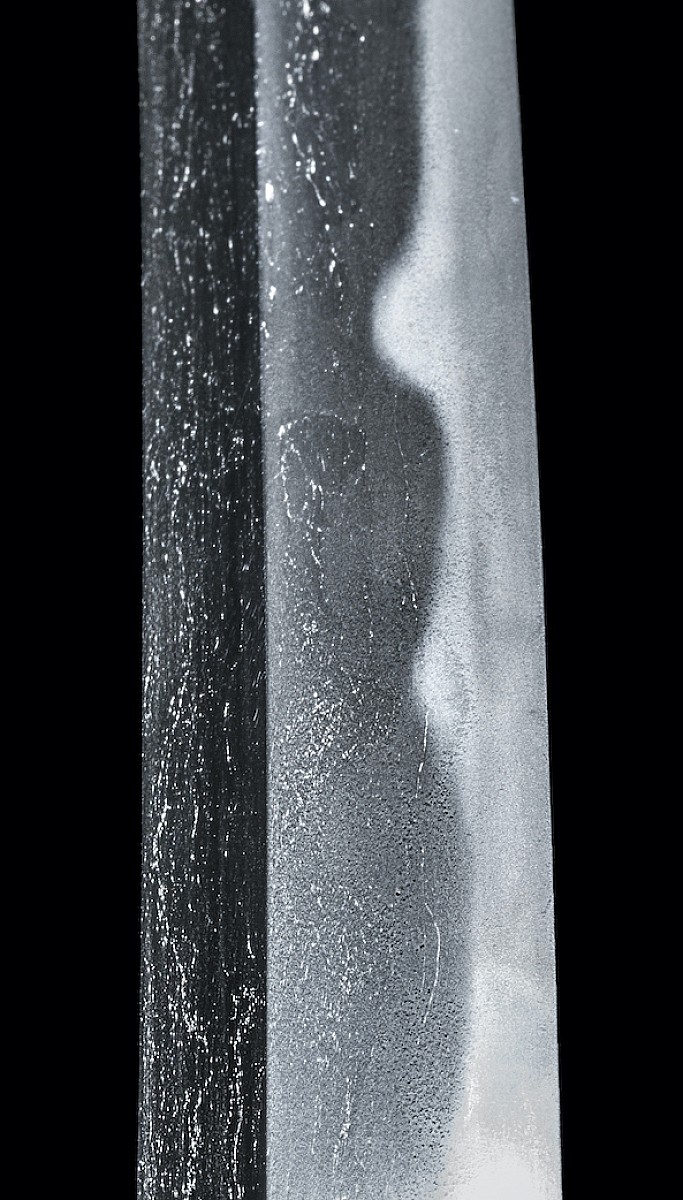 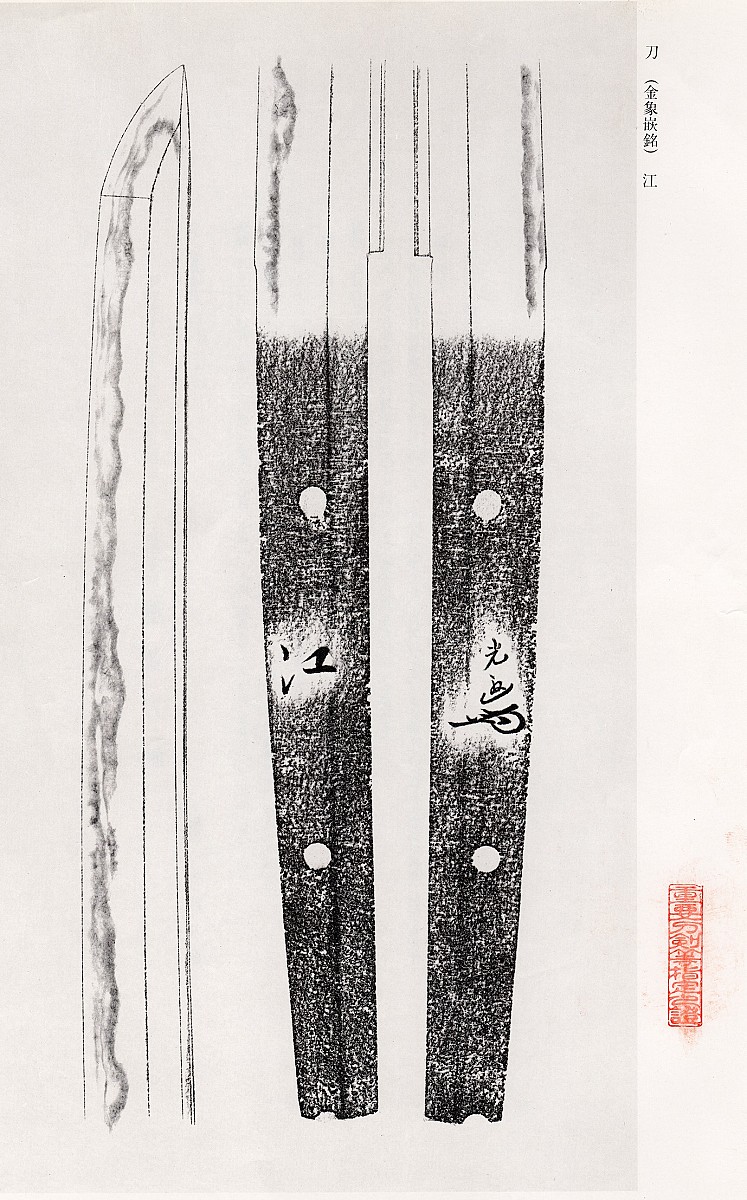 Gō Yoshihiro (義弘), Kenmu (建武, 1334-1338), Etchū, civilian name „Gō Umanojō“ (江右馬允), he lived in Etchū ́s Matsukura district (松倉) and due to his place of residence is was called since earliest times „Matsukura-gō“ (松倉郷), or also shortly „Gō“ (郷) or „Gō Yoshihiro“ (郷義弘), „gō“ means „district“ whereas the latter character was often replaced during the Edo period by the shorter (江). Unfortunately there are neither signed nor dated blades extant by Gō Yoshihiro, but on the basis of works attributed to him his artistic period can be determined from the end of the Kamakura to the early Nanbokuchō period, stylistically he mixed the Sōshū with elements of the Yamashiro and Yamato tradition, that means he does not necessarily emphasize the Sōshū characteristics, he was the best of the „Masamune no jūttetsu" ( 正宗の十哲) and left masterworks like the meibutsu Inaba-Gō (稲葉江), Tomita-Gō (富田江) and Samidare-Gō (五月雨江). Hokurikudō ( 北陸道).

Designated as Jūyō Tōken at the 30th jūyō-shinsa held on the 23rd of November 1983.

The sword is a rare and beautiful example of Gō Yoshihiro’s skill. Almost perfect preservation gives us an excellent opportunity to study the forging techniques the master applied to this sword and to admire their external manifestations on the blade. The NBTHK documents specifically note two points. The first one concerns the bōshi. It is extremely important when evaluating Gō’s swords to pay special attention to it. The NBTHK documents testify to the good quality of the bōshi’s performance, which fully and in all respects corresponds to Gō. The second one concerns the high degree of preservation of the sword in both the ji and the ha areas and throughout the entire blade without exception. 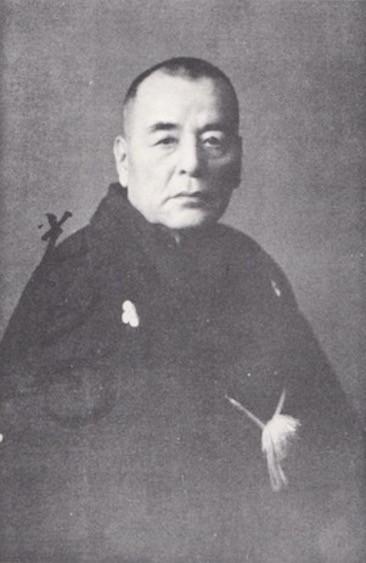 This work contains all the characteristics and distinctive features of Gō’s legacy. An additional element supporting the attribution of the sword is the kinzōgan-mei, performed and signed by Hon’ami Kōson, a highly respected master of polishing and assessing swords who represented the main line of the Hon’ami clan. Of the few extant works that were unquestionably made by Gō Yoshihiro, virtually every sword has two attributes, in addition to its magnificent execution: the proper name of the sword and the kinzōgan-mei, performed by Hon’ami. Therefore, this work satisfies all necessary requirements in order to be indubitably called Gō’s creation. In addition, comparing this sword to Gō’s other swords, which at one time could be seen “in person” and held in one’s hand (including the Jūyō Bunkazai in the Sano Museum), we can note the following features.

First, one great advantage that always arouses enthusiasm about this sword is its well-preserved polishing. Many swords of high status that I happened to see had their polishing in a very worn-out state. Some of the polishing, with all due respect, could be described as “rubbed off.” Of course, they are stored in a very careful manner and rarely shown, although their “lives” are certainly much more intense than those of swords in private collections. Furthermore, such swords tend to undergo polishing as seldom as possible, so as not to remove valuable microns of steel each time. Therefore, certain elements of their design may not be visible, and the activity may look subdued. Yet that does not mean the activity is totally absent, but the current state of polishing does not allow us to see and appreciate it fully. The “Shinano Gō” has preserved the complete freshness of its polishing, and we can clearly see all the elements made by the master during its manufacture, although the polishing was performed about a quarter of a century ago.

Second, this sword has an extremely distinct so-called wet metal effect or urumi (潤み), along with very bright, luminous steel. We get the impression that the sword, after being carefully pulled from its shirasaya, was dipped into a bath of water, taken out, and then immediately examined. This mirror-like effect is further enhanced by the absolutely perfect smoothness of the surface and the complete absence of any even microscopic defects, cracks, or foreign inclusions. It is accented by the beautiful depth of the shinogi-ji surface. In this case, it is very fortunate that the sword has no fuller, and we can fully observe how the “wet steel” effect combines with the depth of the shinogi-ji area. The metal here appears so transparent that it seems possible to see the curves of orikaeshi, even of the core metal. It is akin to patterns drawn on sand in the depths of flowing water.

Third, this sword has extraordinarily visible and intense ji-nie (地沸) that appears in the form of large black grains of martensite in the hira-ji area. They do not rise high to the shinogi line, but their large clusters follow the nioiguchi line, sometimes pouring through it to the ha area. This is also one of the features of Gō’s works, and here, in the example of this sword, the intensity and continuity of these ji-nie clusters are particularly pronounced. We get the impression, especially if we zoom in and take high-resolution photographs of this sword, that it is all literally made up of black grains of martensite, the smallest of which become visible only at sufficiently high magnification.

The valuation for this sword made by Ted Tenold stipulates that works of such a high level are very rarely encountered “in person.” Therefore, they are sometimes referred to in poetic form. Indeed, many such swords became the subjects of legends and poems. Thus, for example, the sayagaki on the old shirasaya made by Uchida Soten is written in the form of a small poem dedicated to this sword. Examples of such written sayagaki are generally few and extremely difficult to see. The inscription made by Uchida Soten is as follows:

It can be roughly translated as follows: “This tachi is modest and unobtrusive and as it is unsigned, too, the one unaware might overlook its true value.” Signature: “疎翁六十八” can be interpreted as: “The old So(ten) age 68.” That is, the sayagaki was made in 1939. On the back of the shirasaya, there is an inscription also made by Uchida Soten, “信濃江,” which means that the name of this sword is “Shinano Gō.”

<.....> In any field of art, there are works that represent the pinnacle of creativity and are considered by collectors and connoisseurs the epitome of mastery. This very sword grants the connoisseur more satisfaction from contemplation than most or even all the swords he has seen previously. The “Shinano Gō” manifests the level of knowledge and inspiration the master applied when producing it. This makes it quite easy to confirm that, as with all works of genius, the whole—the essential spirit of the sword—is greater than the sum of its individual parts. It is no accident that in Japan, such swords are often described in poetic terms. This is perfectly understandable, because it is easier for a poet to describe the sensations evoked when he holds this sword in his hand. Uchida Soten actually did this in his sayagaki.