Kunishige’s artistic activity is one the most difficult for studying and understanding among all in the history of the so-called old Sagami School. Moreover, the main problem is not that there are no swords attributed to the work of this master survived to our times, but that often his artistic activity is confused with Hasebe Kunisige and there is no clear understanding of the connection and differences between these two lines. This assumption is based on the fact that some meikan contain Kunishige’s signature options: Hasebe Kunishige“ (長谷部國重) and Sagami no Kuni Kamakura-jūnin Hasebe Kunishige (相模国鎌倉住人長谷部國重). Supposedly, Hasebe was a family name of Shintōgo Kunimitsu line and two his elders sons Kunishige and Kunihiro used it for signing his works. Moreover, some of genealogy lines examples contains Hasebe name near Kunishige name. 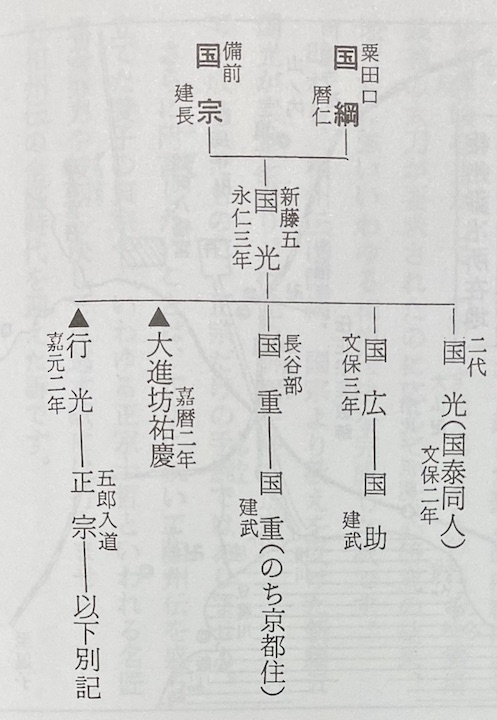 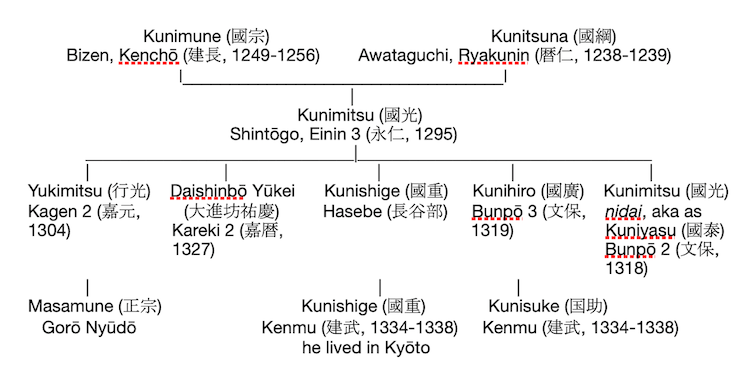 The history of the emergence of the family name (mon) “Hasebe” was thoroughly studied and described by Markus Sesko (for more detailed information see: https://markussesko.com/2013/06/06/the-hasebe-school-and-hasebe-kunihira/). Perhaps Kunishige’s birthplace was a settlement called Hatsuse (初瀬), located in Sakurai (桜井), which is 20 kilometers south of the city of Nara in Yamato Province. The name of this settlement was later pronounced “Hase.” It is worth mentioning that the word Hase in this region appears in many geographical names. So, for example, a local hill is called Haseyama (初瀬山), and another settlement located nearby is called Hasedera (長谷寺). We should note that in these cases, “Ha Se” is written with different kanji but is read the same way. Therefore, it is impossible to base anything on a difference between the written name Hasebe and the place of his alleged origin, because the pronunciation of these names and locations is identical. [excerpt from Chapter 11, pp. 277-289, of the Japanese Swords: Sōshū-den Masterpieces]

Additionally we can note that there is a connection in the manner a signing «Kuni» kanji. With respect to Hasebe Kunishige’s signature, it is necessary to note the features existing in the written “Kuni” kanji. The master wrote it in three different ways:

However, it should be noted that the classic manner of the «Kuni» kanji, was used extremely rarely by Hasebe Kunisige. It is possible to note only one sword that has survived to the present day as an example: Jūyō Token tantō #21. Thus, the availability of these data rather refutes the assumption about that these two masters: Sagami Kunishige and Hasebe Kunishige, could be the same person. 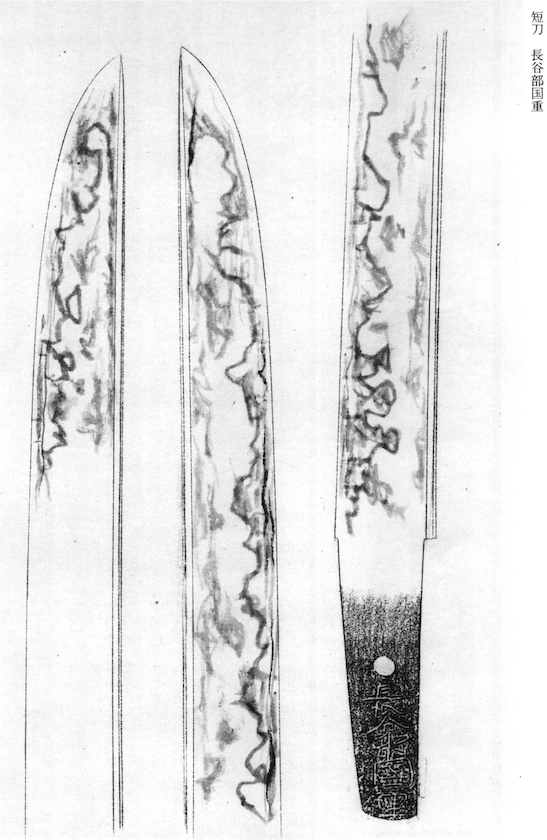 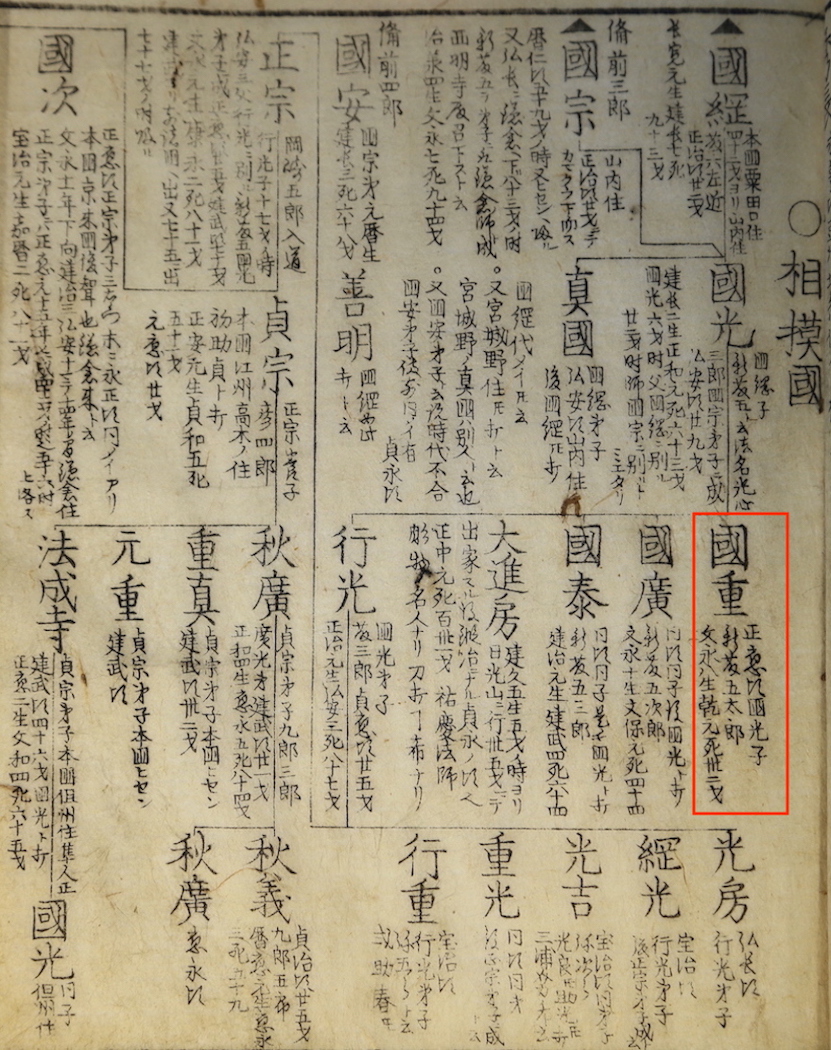 Kunishige was a son of Kunimitsu and his name was Shintōgo Tarō (新藤五太郎). His tachi-sugata basically follows that of his father. His ha however is wider than that of Kunimitsu and there is usually no utsuri. Bonji are engraved in a rather shallow manner and horimono have in general somewhat noticeably angular edges, a feature that bears a certain resemblance to the interpretations of Yukimitsu. His kitae is an itame. Kunishige also signed with “Kunimitsu” and the "Kuni" kanji is in this case chiseled in about the same way as seen at his father. 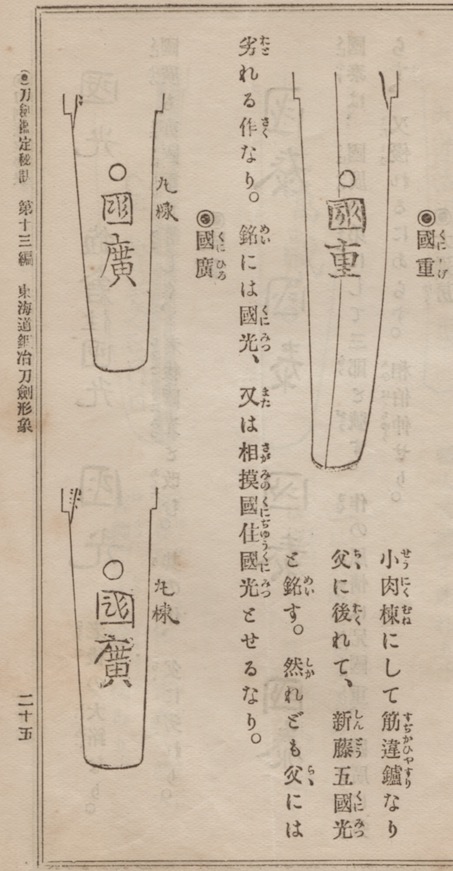 There is another one portion of information in the Kokon Meizukushi Taizen: KUNISHIGE (國重) around Genkō (元弘, 1331-1334), Shintōgo Tarō (新藤五太郎). His tachi-sugata basically follows that of his father [Shintōgo Kunimitsu]. His ha however is wider than that of Kunimitsu and there is usually no utsuri. Bonji are engraved in a rather shallow manner and horimono have in general somewhat noticeably angular edges, a feature that bears a certain resemblance to the interpretations of Yukimitsu. Kunishige also signed with “Kunimitsu” and the "Kuni" kanji is in this case chiseled in about the same way as seen at his father. The kitae is an itame. 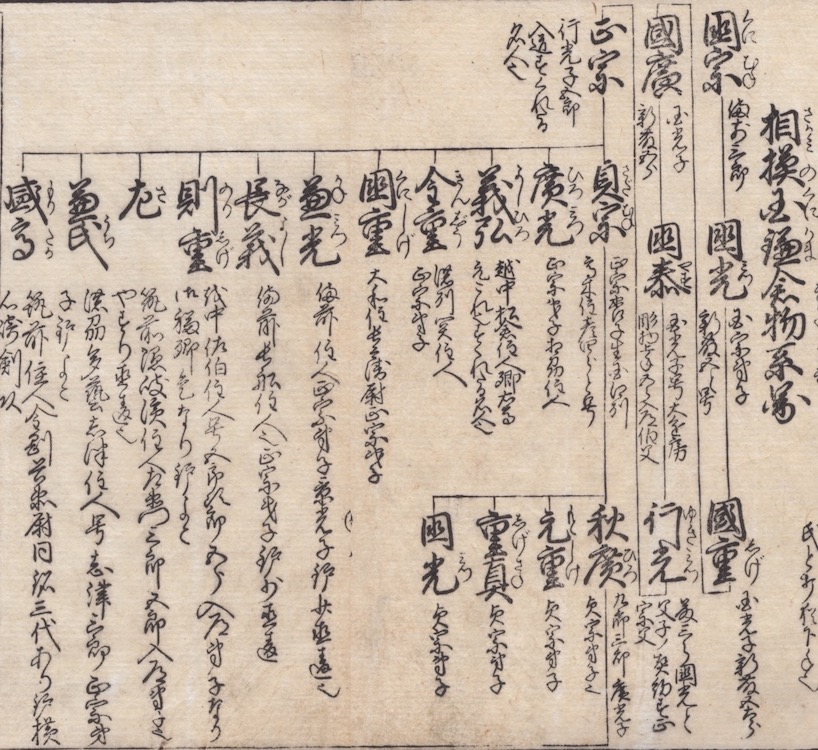 The Kanchi’in Bon Mei Zukushi (観智院本銘尽) contains the followed lines where we can find information about Sagami Kunihiro place in genealogy of the Sagami School. 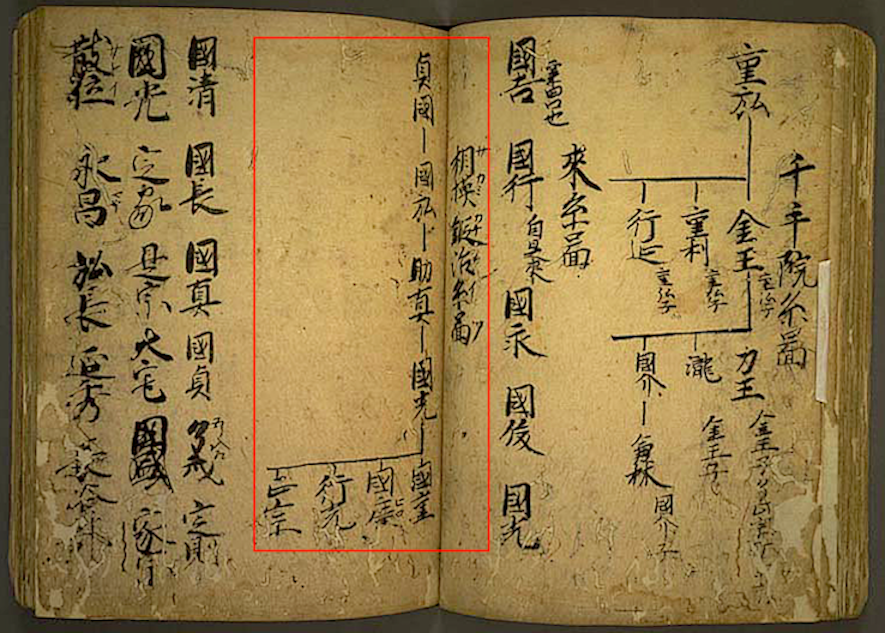 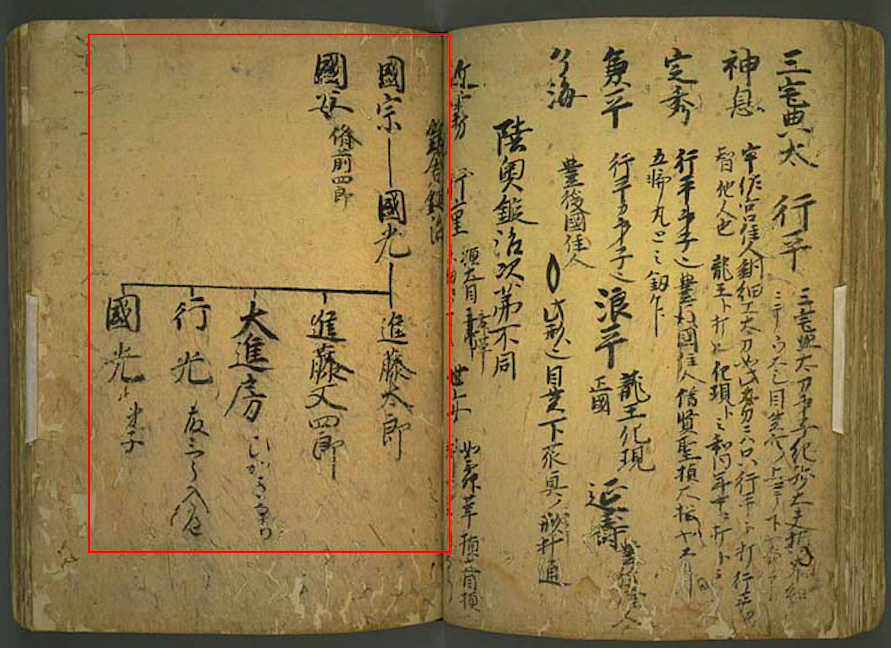 We have to pay attention that in genealogy presented in the figure 5 Kunishige’s name indicated as 進藤太郎 (Shindō Tarō). Some experts believe that it was Shindō that was the family name for Shintōgo Kunimitsu direct line and it was distinguish characteristic determine the belonging to this main line. It must be recognized that the main feature is the alternative manner of the first kanji writing: 進 instead of 新. It is not possible to ignore an information presented in so important old manuscript as Kanchi’in Bon Mei Zukushi but there are only few other sources using this kind of transcription (進) and Hasebe in form of family name has a much more weighty argument in form of using this name in a real signature. 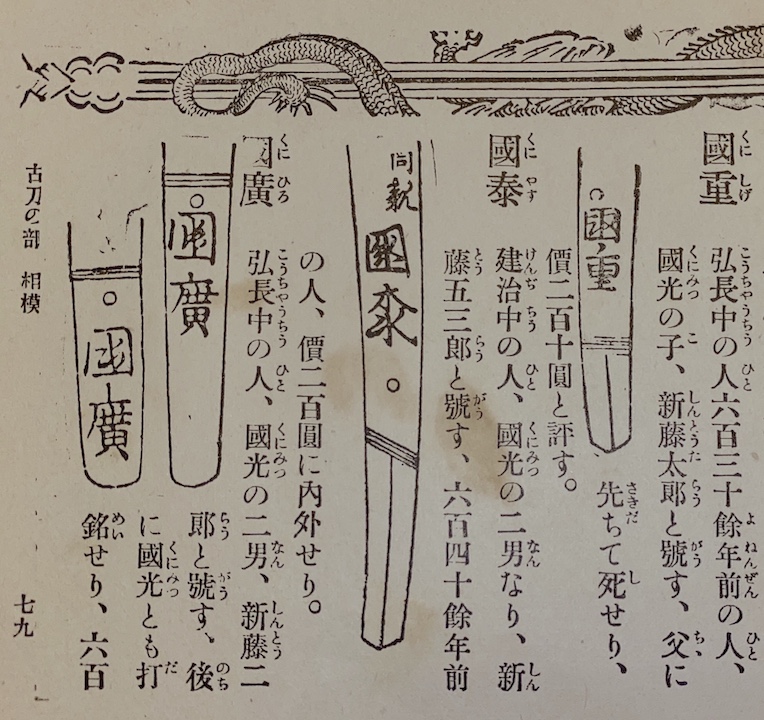 Studying the particularities of Kunimitsu’s «Kuni» kanji chiselling we can conclude: As for the kanji writing style in Shintōgo Kunimitsu’s signature, we have to pay attention primarily to the characteristics of the “Kuni” kanji (國). Shintōgo, unlike other smiths and as far as extant signed blades are concerned, always drew its central internal line strictly vertical. The inner part contains a mirrored “S” on the left side from vertical line (see Japanese swords: Sōshū-den Masterpieces, pp. 48-49). Extremely rarely one could find in old manuscripts that: the left inner part of his “Kuni” kanji is not always signed in the same way (Tōken Kantei Hikketsu, Volume 1, p.55). The most common statement, one can find in old manuscripts for Kunishige’s signature is: all three smiths, i.e. Shintōgo, Kunishige, and Kunihiro signed the left inner part of the «Kuni» kanji in the same way.

There is only one example of «Kuni» kanji for Shintōgo signature which was written in different style from a classic one: Jūyō Bijutsuhin tantō #198 (published in the Nihontō Jūyō Bijutsuhin Zenshū, Volume 2, p. 104) but the setsumei noted that «Kuni» kanji chiselled in not traditional manner. 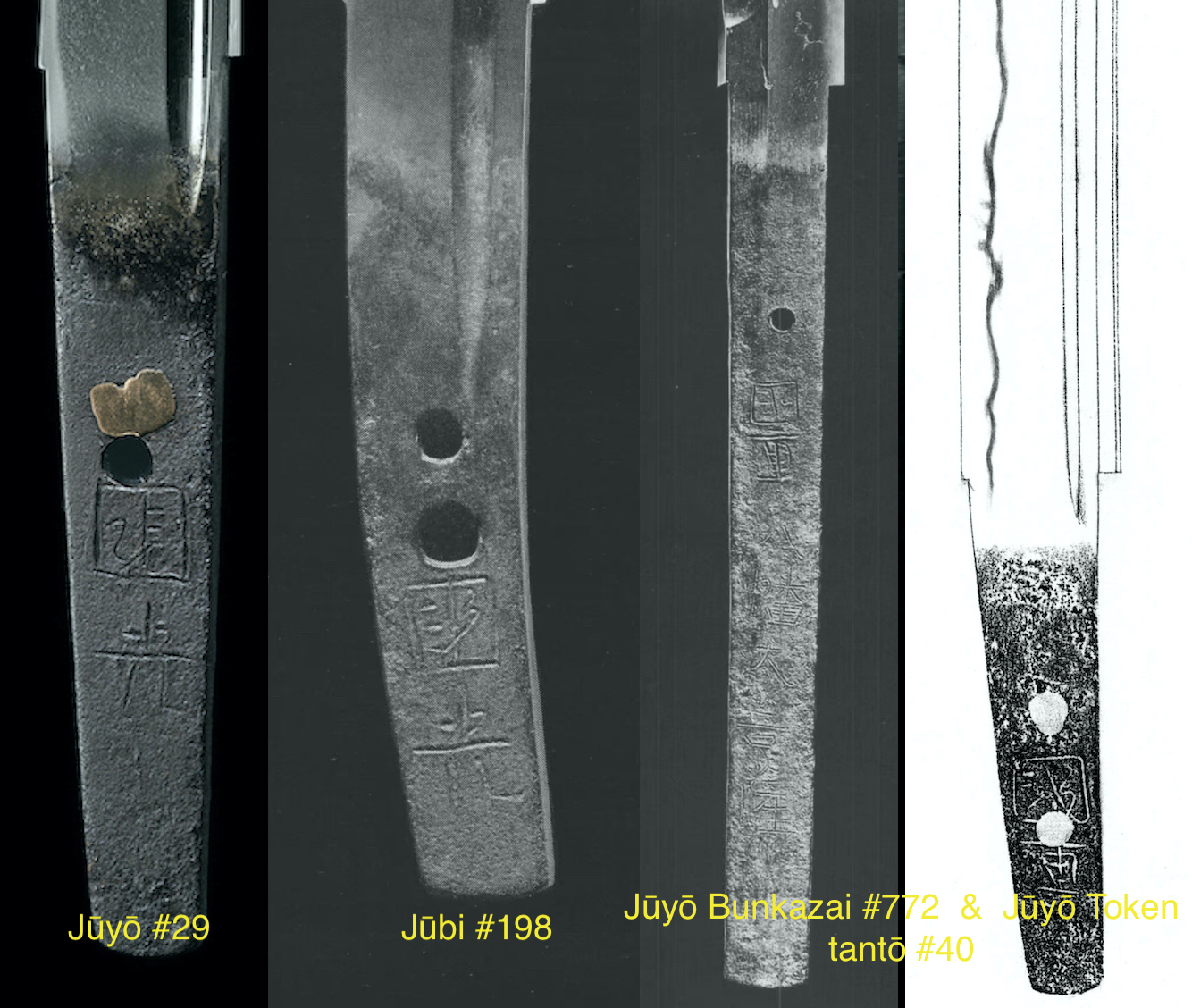 Thus, summing up all information presented above it is possible to make an assumption that Kunishige applied the same style for chiselling the «Kuni» as his father Shintōgo Kunimitsu. Thus, we have to divide all Kunishige’s signatures examples finding in old oshigata books in to two parts. The smallest (it must be admitted) part are a very rare examples of the «classic» way for the «Kuni» kanji with a minored “S” on the left, and another part that include all other ways for the «Kuni» kanji chiselling. In one’s turn, all so-called Kunihiro’s oshigata-in-question could be divided on two parts: non-Sagami Kunishige signature's oshigata and Sagami Kunishige’s oshigata made with error or made inexactly. Every one Sagami Kunishige’s oshigata seen in old manuscripts must be carefully studied in order to have not been confused with examples of Senjū ́in Kunishige or Higo Kunishige signatures. I case of positioning a minored “S” of «Kuni» kanji from the right side from a vertical line and absence of any notes which are regarded this signature to Sagami (Kamakura) Kunishige, we cannot take in to account this oshigata as Sagami Kunishige’s signature example.

In addition it is necessary to pay attention on the existence of examples of signatures of swordsmiths using Kunishige name and belonged to another schools and time epochs. One can seen that at least two swordsmiths chiselled inner part of the «Kuni» kanji disposing a minored «S» from the right part of the vertical line, not from the left. Two swords (see on the photo below) can be cited as the most typical examples: Jūyō Token tantō #40 by Enju Kunishige (延寿國重) and naginata-naoshi Jūyō Bunkazai #772, signed as Kunishige (國重). 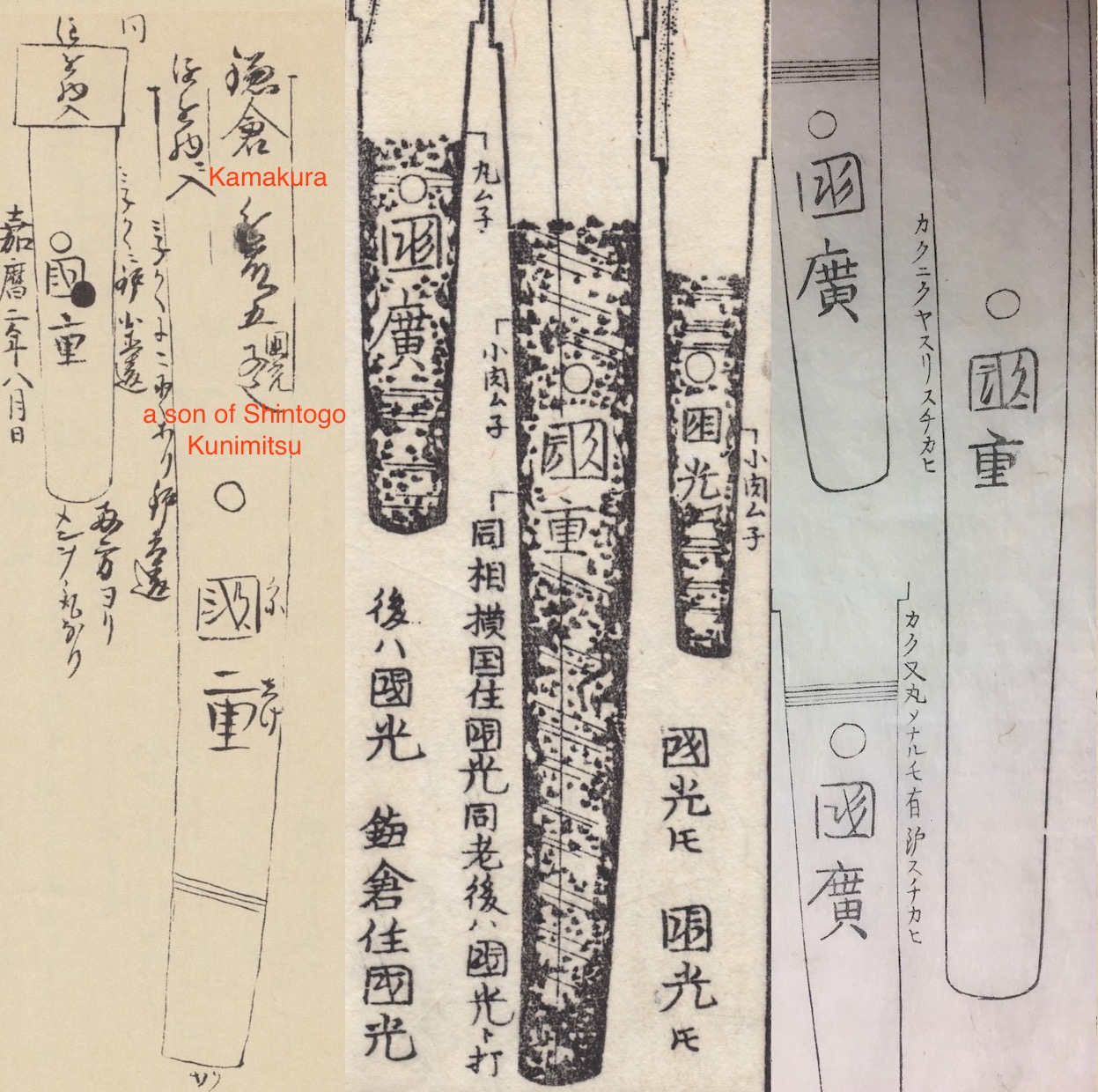