06 november 2019
Suketsuna arrived to Kamakura accompanied his father Sukezane; he is one of the Sōshū-den founders and best Sukezane's disciple. 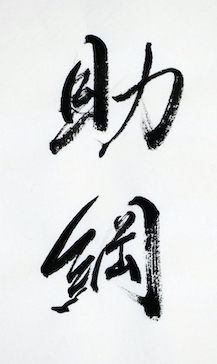 Kamakura Ichimonji Suketsuna (鎌倉一文字助綱) started his education as a master of the Fukuoka Ichimonji School. At birth, he was given the name Tōgenji (藤源次). He was a son of Sukezane and his best disciple. At a young age, he came to Kamakura with his father, and, together with other masters, he established the Sagami School. According to some sources, he was actually a son of Fujiwara Tsugusuke (藤原次助) and Sukezane adopted him later. His most prolific period occurred mostly during the Bun’ei era (文永, 1264–1275). Many sources agree that he came to Kamakura with Sukezane at a fairly young age and resided in its northern region, in the district of Yamanouchi (山ノ内). An extant oshigata of a sword manufactured by Suketsuna has the following inscription: “Resident of Kamakura Yamanouchi Suketsuna” (鎌倉山内住助綱). The inscription dates back to the Bun’ei era (文永, 1264–1275) and refers to this period of the master’s activity. We can find this oshigata in the Kōzan Oshigata (光山押形) and the Kotō Meizukushi Taizen (古刀銘盡大全). The sword itself has not survived until our time, so we cannot arrive at an unambiguous conclusion about the authenticity of both the signature and the sword.

It is generally assumed that the Sagami School was established by three smiths: Awataguchi Kunitsuna, Ichimonji Sukezane, and Bizen Kunimune. They are considered its forerunners, although they manufactured no swords in the pure Sagami style. However, Satō Kanzan (Kan’ichi) (佐藤寒山[貫一], 1907–1978) also reckons Suketsuna among the founders of the school’s tradition and speaks about four smiths being forerunners. Suketsuna works show an even stronger affinity with the “pure” works of the Sōshū-Den tradition. This is especially expressed in a much stronger manifestation of nie than we traditionally find in works by Fukuoka Ichimonji smiths. However, in spite of this, we can assume that Suketsuna retained a general commitment to his school, and, for this reason, his work is not considered to be part of the “pure” Sagami School. As already noted, Suketsuna came to Kamakura at a fairly young age and had many opportunities to get acquainted with experiments carried out by other great masters who worked in Kamakura at that time. As a result, he was strongly influenced by the newly emerging tradition of Sagami. 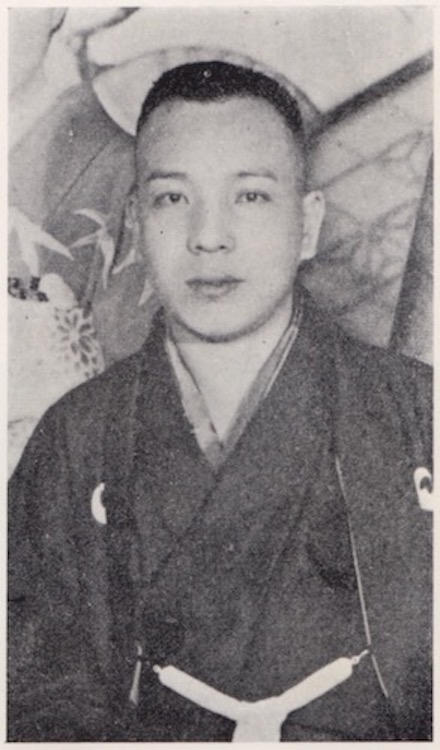 There are several conflicting reports about the years when Suketsuna actively engaged in sword making. In particular, Albert Yamanaka defines this period as the Shōwa era (正和, 1312–1317), whereas Fujishiro Yoshio (藤代義雄) indicates the date of Suketsuna’s creativity as the year 1321. It is not clear whether this year means the pinnacle of his creative activity or the last year of it. As is the case with Sukezane’s works, it should be noted that Suketsuna has no dated items extant in our time. Similarly, there are no known sword oshigata from old books and other sources that have the manufacturing date, except for the above example from the Kōzan Oshigata. That sword was signed with a long name and therefore is not typical. On this basis, we can assume that Suketsuna, similar to Sukezane, did not put the manufacturing date on his works. We can deduce the years he worked as a swordsmith only from records that refer to the movement of a group of smiths, including Suketsuna, in Kamakura, where they created new trends in smithcraft. The absence of a date on Suketsuna’s works was most likely intentional. Even though any surviving long swords with the master’s signature have been shortened, the signature location lets us conclude that if the sword tang had a date, the latter would have been preserved along with the signature, fully or partially, rather than left on the part of the nakago that was removed. In other words, when studying the work of this master, we must assume that he did not date his works at all or dated them very rarely.

When determining the period of Suketsuna’s activity, we need to take into account that he arrived with his teacher in Kamakura in 1266 at a fairly young age. We should correlate this information with Fujishiro san’s data, which mentions the existence of a sword bearing the date of its manufacture: “the 1st year of the Genkō era” (元享, 1321). If we assume that Sukezane and his successors arrived in Kamakura in 1266, this data does not contradict that fact. Given that Suketsuna was just a few years old at that time, then his “late” sword would have been made by him at age sixty, which seems logical.

We can speak about several stages of Suketsuna’s works. However, we need to take into account that all his works, even those manufactured at a later time (including the one dated 1321), have the characteristic features of the Fukuoka Ichimonji School. Despite that, his works also approach the style of Sagami, and even though he was significantly influenced by brilliant smiths of the new tradition for most of his adult life and worked side by side with them, the master didn’t betray his own style. That is why it seems logical that this old master of the Fukuoka Ichimonji School, at the age of about sixty, took into account new trends, modern for his time, but did not reject his fundamental teachings and still adhered to methods of his old school. We could compare him to a young disciple of the second Sagami generation whose art was formed in Kamakura in early 1300s, at the time of Shintōgo Kunimitsu, Yukimitsu, Masamune, and Norishige. The latter would likely work in the “pure” Sagami style, more so than an old master such as Suketsuna, having all the accumulated knowledge of the old school under his belt.

We also should not ignore the information contained in the manuscript titled Kotō Meizukushi Taizen (古刀銘盡大全), according to which Suketsuna was born in the 1st year of the Bun’ei era (in 1264) and died in the 51st year of his life in the 3rd year of the Shōwa era (in 1314). The Kotō Meizukushi Taizen is an extremely important source of information, especially since it documents the lives and the genealogical lines of almost all famous schools and smiths, and the records contain fairly logical information. However, much of the data presented therein does not correspond with and sometimes contradicts data from other sources. If we take as a basis the years of Suketsuna’s life as specified in the Kotō Meizukushi Taizen, it would mean he arrived in Kamakura with his father when he was only two years old. Therefore, the sword bearing the manufacturing date of 1321 needs further study, as does the one signed “Inhabitant of Kamakura Yamanouchi Suketsuna” (鎌倉山内住助綱) and dated in the Bun’ei era (文永, 1264–1275). Yet at present, this is not possible, since both of the above-mentioned swords have not survived until our time; we have only their oshigata and descriptions.

Kokon Kaji Bikō (Volume 4, p. 53/2) tells us that he also lived in Kamakura Kurumaōdō (車大道). There were three swordsmiths of the Kotō period known as Suketsuna. The end of the master’s creative activity period was in the Tokuji era (徳治, 1306–1308).

According to the rating by Fujishiro Yoshio (藤代義雄), the level of Suketsuna’s work is saijō-saku (最上作, the highest level of craftsmanship). Nowadays, we know only of long swords, tachi and katana, made by Suketsuna. There is no indication (not even in the oshigata collections) that he ever manufactured short swords. Therefore, it is quite possible that he never made them.

Suketsuna’s surviving works are very rare, especially signed ones. Currently, we know of only 8 of his works of the Jūyō level; 1 sword having the status of Tokubetsu Jūyō; 1 sword with the status of Jūyō Bunkazai; and another 2 works were awarded the status of Jūyō Bijutsuhin. Overall, just 12 swords made by this master (who presumably worked for a sufficiently long period of time) have survived until our time. Only 4 of them still have a signature. Yet these preserved signatures allow us to conclude that Suketsuna signed with two kanji: “Suke” (助) and “Tsuna” (綱), slightly larger than average size. The first kanji of his name, “Suke,” is written in a very similar manner as the one in Sukezane’s signature. Three of the four signatures on surviving swords made by Suketsuna are tachi-mei, and one signature is katana-mei, which appears on the Jūyō Bunkazai sword. By the way, we can see the same type of signature in the “Inhabitant of Kamakura Yamanouchi Suketsuna” oshigata displayed in the Kōzan Oshigata. However, some sources speculate that this work may actually go back to the hand of his disciple Sukemitsu (助光). The small number of works with the status of Jūyō Bunkazai and Jūyō Bijutsuhin does not mean that the quality of Suketsuna’s works was lesser than that of, for example, his teacher Sukezane. It merely indicates the extraordinary rarity of his surviving works, whereas the availability of items featuring this high status means that the smith achieved the highest level of craftmanship.

This is interesting that Suketsuna chiselled his signature using alternative variant of the kanji "tsuna". Kunitsuna used simplified variant 縄 instead of 繩. Very rarely in old books one can find an explanation and an indication of this phenomenon. 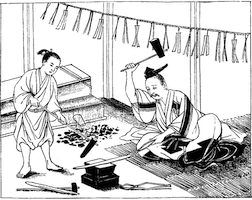 Suketsuna’s works are very similar to those by Sukezane and have the following distinguishing features:

Sugata: The tachi sugata has an ikubi-kissaki that is typical for the middle Kamakura period, with a strong koshizori and a slight narrowing from the machi to the kissaki; a wide mihaba, and a hira-niku or ha-niku.

Jitetsu: A well-forged itame-hada mixed with mokume-hada; the prominence and granularity are more pronounced than in Sukezane’s works, approaching zanguri; sometimes, ō-mokume-hada is seen; there are chikei and a midare-utsuri, the jiba is clear, and the utsuri is a little subdued.

Hamon: The ōbusa-chōji (大房丁子) is not as bright as in Sukezane’s but has more chōji or appears as suguha with chōji-midare with insignificant variations in the depth of the yakihaba waves; the hamon is even more saturated with nie, nie-kuzure, ashi, and yō.

Nakago: it is relatively long; there are some sori and kirijiri, and the yasurime are ō-sujikai; the signature is in large kanjis; and, in most cases, tachi-mei, rarely katana-mei.

Horimono: Some works have horimono on both sides of the blade in the form of bō-hi or futasuji-hi.

(excerpt from Chapter 2, pp.28-39, of the Japanese Swords: Sōshū-den Masterpieces )