Gotō Mitsutada lived in Kyōto and worked in the style of his brother Gotō Ichijō. Mitsutada’s work is much less studied compared to his older brother. A relatively small number of Mitsutada’s works have survived to our time, however, it can be noted that they are all of the highest level and quality. One of the reasons is that he lived a short life and died in the first year of the Meiji era (明治, 1868) at the age of 63. 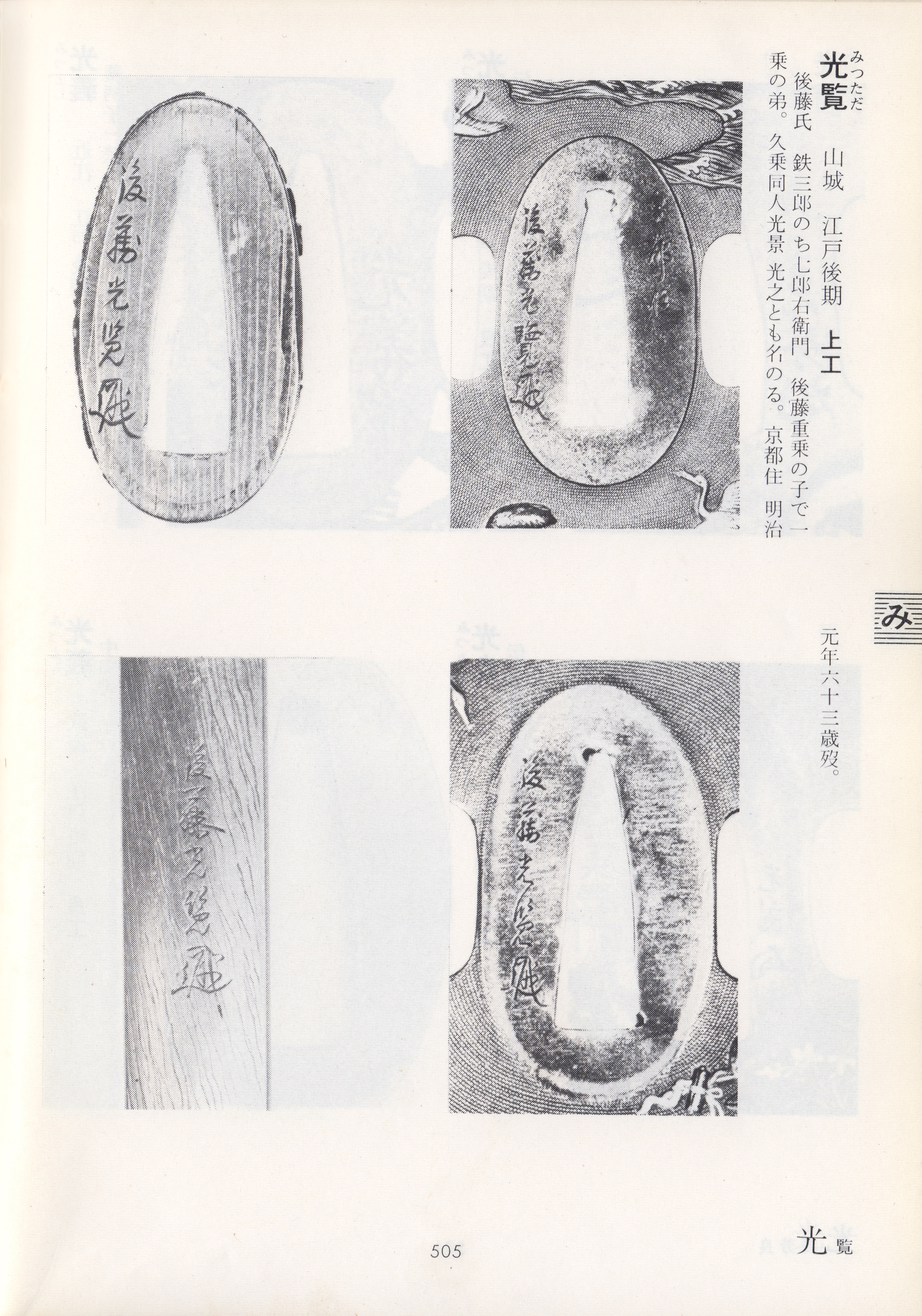 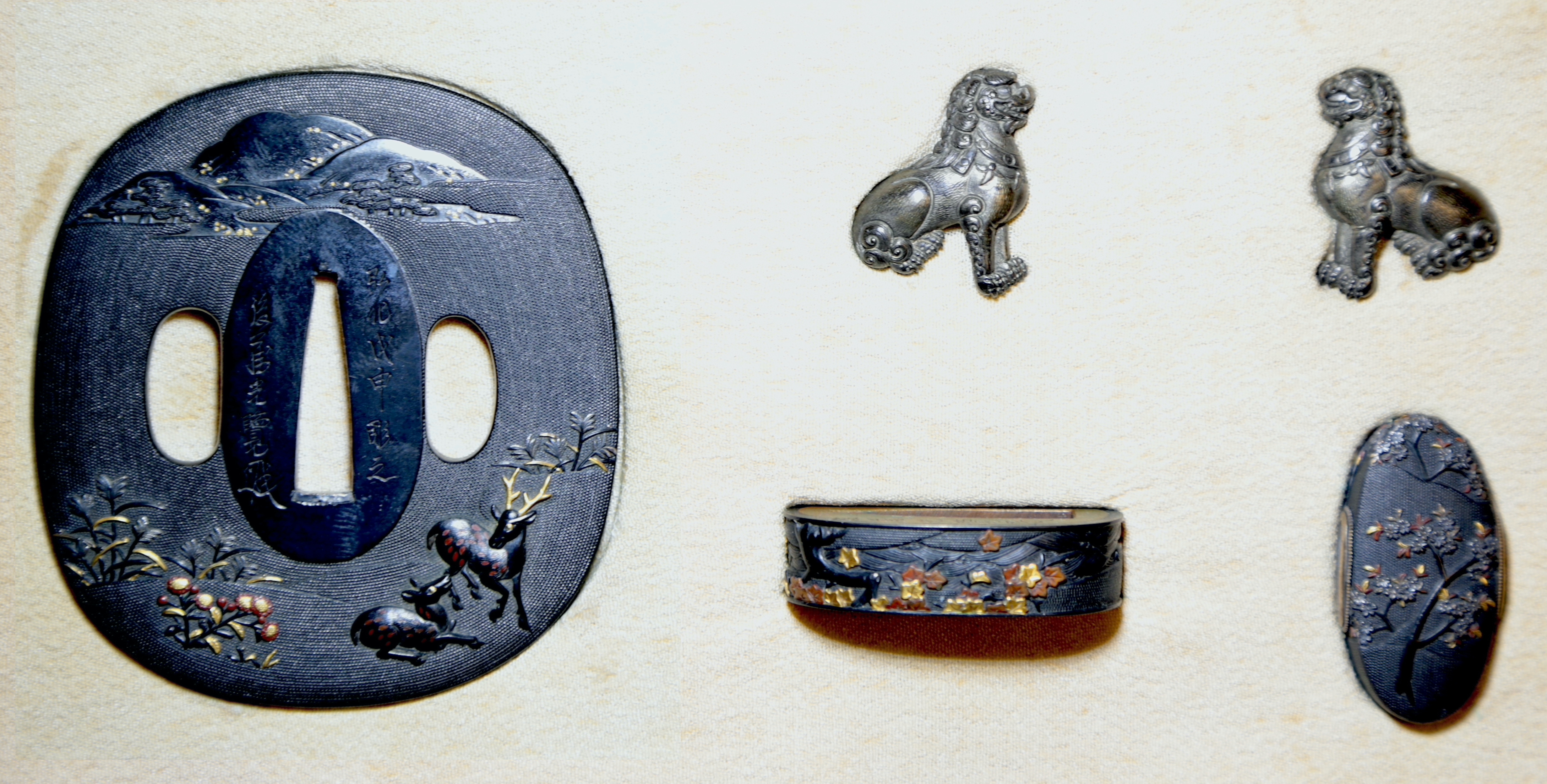 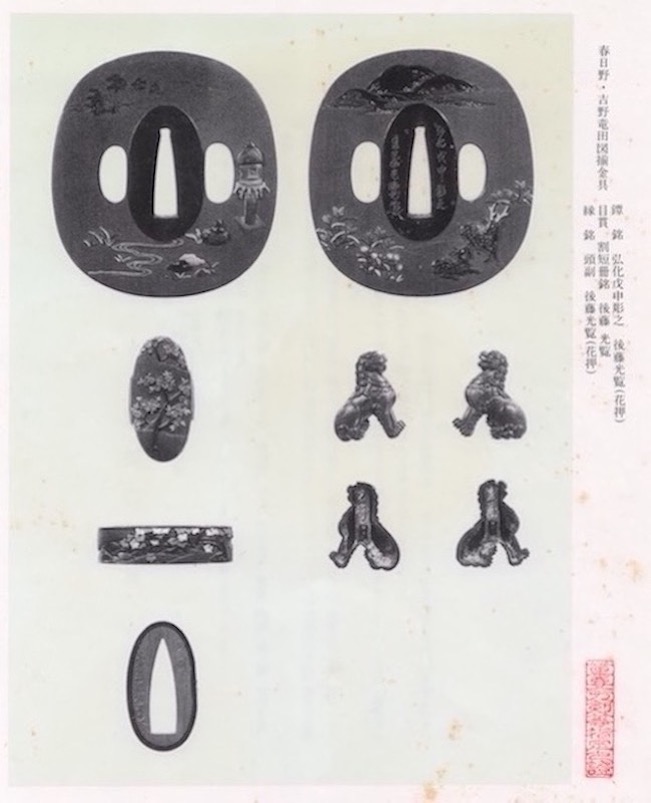 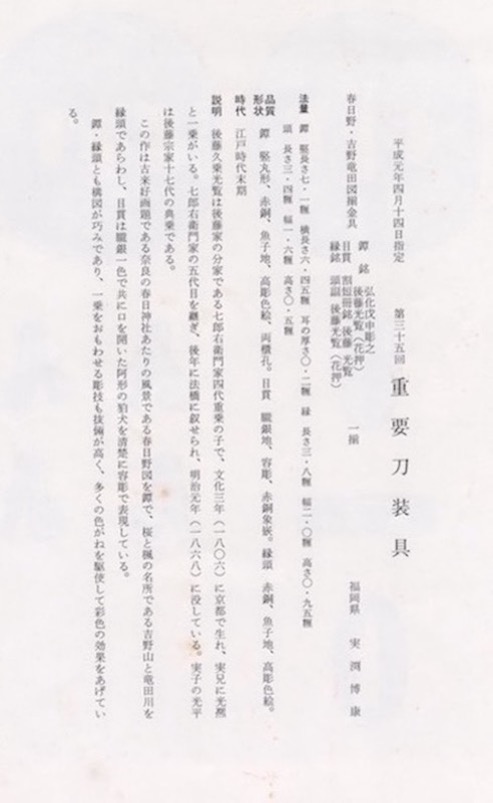 A set of metal fittings with motifs of Kasugano, Yoshino and Tatsuta

Commentary: Gotō Kyūjō (Kōran, Mitsutada) was the son of 4th generation head of Shichirōemon family, which was a sub-line of Gotō clan. He was bornin 3 year of Bunka era (1806) in Kyōto. His true older brothers were Mitsuhiro and Ichijō. He inherited Shichirōemon family’s leadership as the 5th head of the family, and in later years was bestowed with hōkyō title. He died in the 1 year of the Meiji era (1868). His true son Mitsuhira become the 17th head of mainline Gotō clan under the name of Tenjō.

This work is depicting Kasugano plain on tsuba, which is a motif popular from old times, being a view near Kasuga shrine in Nara [city].Fuchi and kashira depict Yoshino mountains and Tatsuta river, which are places famous for cherry blossoms and maple leaves. Menuki use only one color of rōgin [alloy] to depict komainu (lion-dogs) neatly, both of them are “A”-shaped with open mouths.

The compositions on tsuba, fuchi and kashira are all dexterous; carvings are of the high level reminding of Ichijō works. Many different non-ferrous metals are used in the works to enhance the color effect. 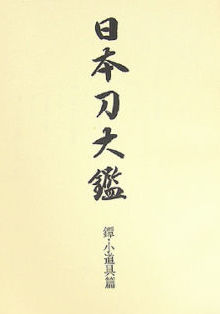 Gotō Mitsutada died at a relatively early age and therefore few of his works have survived to this day. His skill level was comparable to that of Gotō Ichijō, and some of his works show a completely unattainable level of quality and artistic taste. An extremely rare example is this work presented here, which, due to its high quality, has been awarded a publication in the Nihonto Taikan (日本刀大鑑, Honma Junji (本間順治), Satō Kan’ichi (佐藤貫一) and others, 1966–1972). 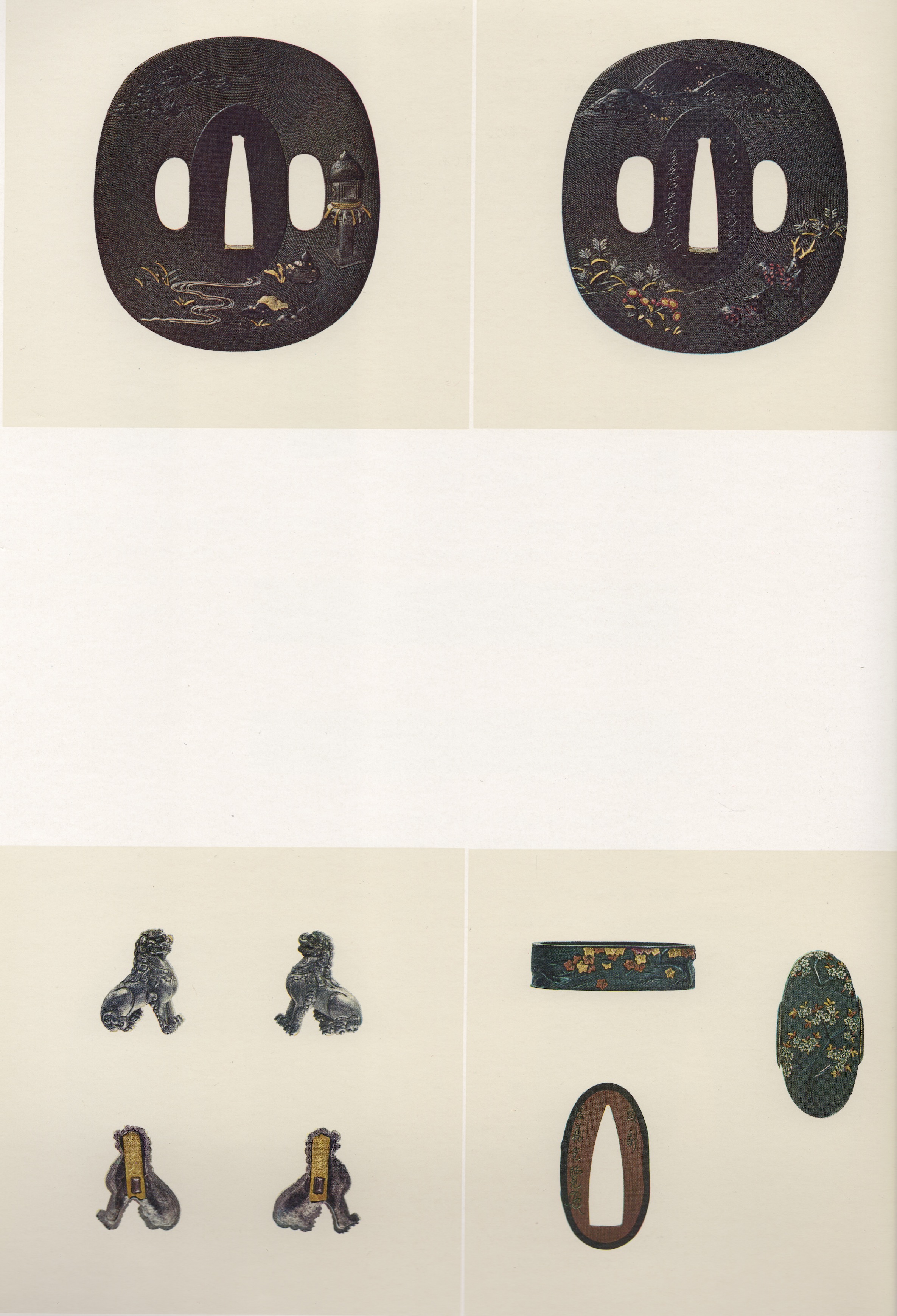 Commentary: A motif of a plain with a troop of deerand stone lanterns is usually called Kasugano. It is a view of a plain near Kasuga shrine in Nara [city], the mountains in the distance on the face side are Mt. Mikasa, it is a motif that has been popularfrom old times. Mitsutadawas a younger brother of Gotō Ichijō, he was a kinkō smith living in Kyōto. Thus all [of his works] are similar to Ichijō’s. Kōka boshin was a 5th year of Kōka [era], there was a change of the name of the era and it became 1st year of Kaei, so this is a work of 58-years-old Mitsutada. Some of his works are signed as “Kōto-jū” (living in the emperor’s capital). (Numata) 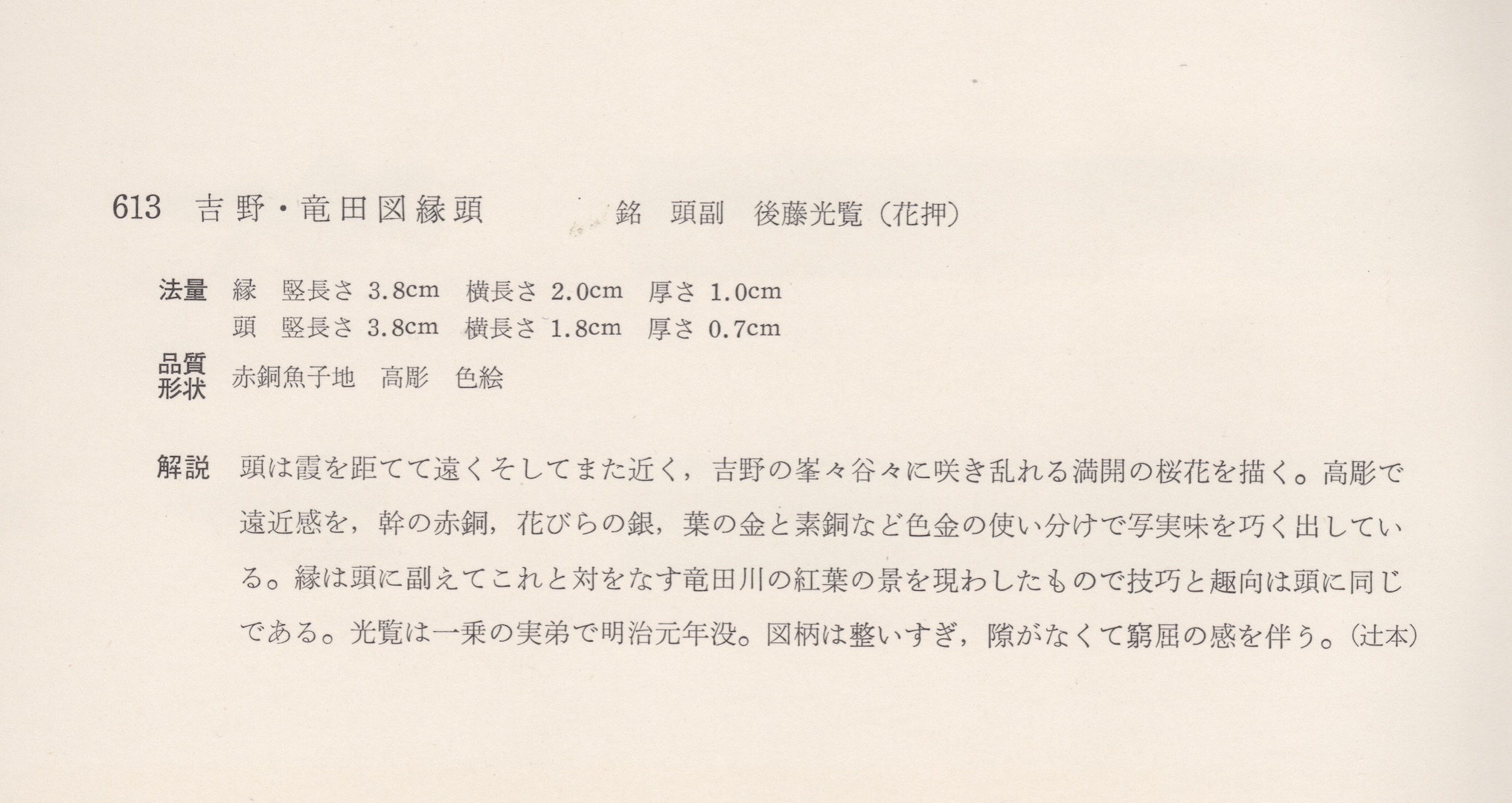 Commentary:. The kashira depicts sakura flowers in full bloom being close and in the distance on peaks and valleys of Yoshino divided with mist. The perspective is reached with taka-bori [technique]. Iro-e uses various colors [of metals], shakudō for tree trunks, silver for flower petals, and gold for leaves, it is skillfully giving a sense of realistic depiction. Fuchi is made as a match for kashira, depicting a pairing view of fall leaves on Tatsuta river, techniques and style are the same with kashira. Mitsutadawas a younger true brother of Gotō Ichijō, he died on the first year of Meiji [era]. The motif depiction is overdone, there is no free space and it gives a feeling of being crammed. (Numata)

Commentary: Komainu figures placed in shintō shrines are usually in two shapes, “A” (open mouth) and “Un” (closed mouth). But these menuki have both of them “A”-shaped with open mouths, the delicate carving is very elaborate. The fact that no other metal is mixed in here is good, giving a sense of purity. (Tsujimoto) 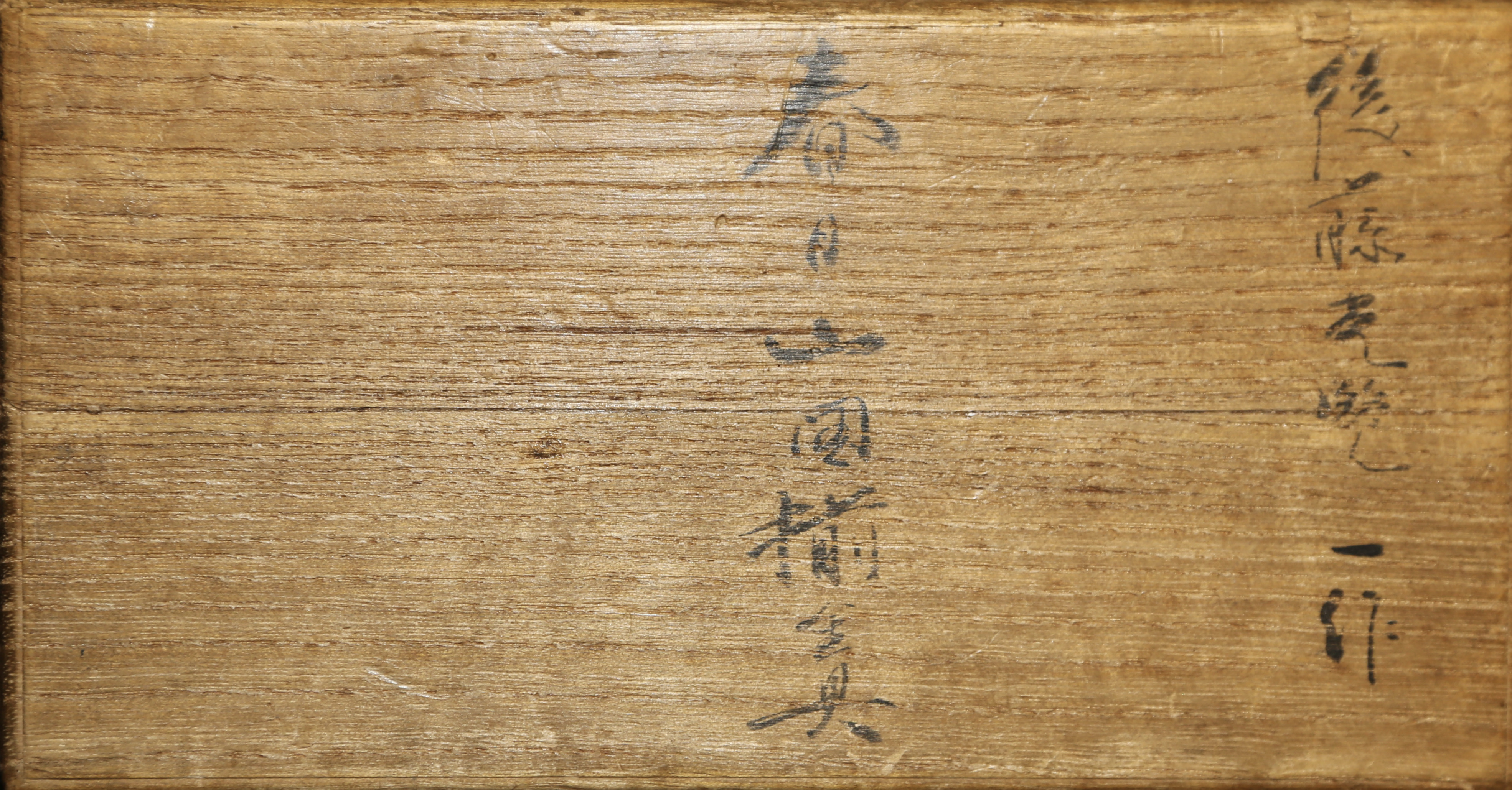 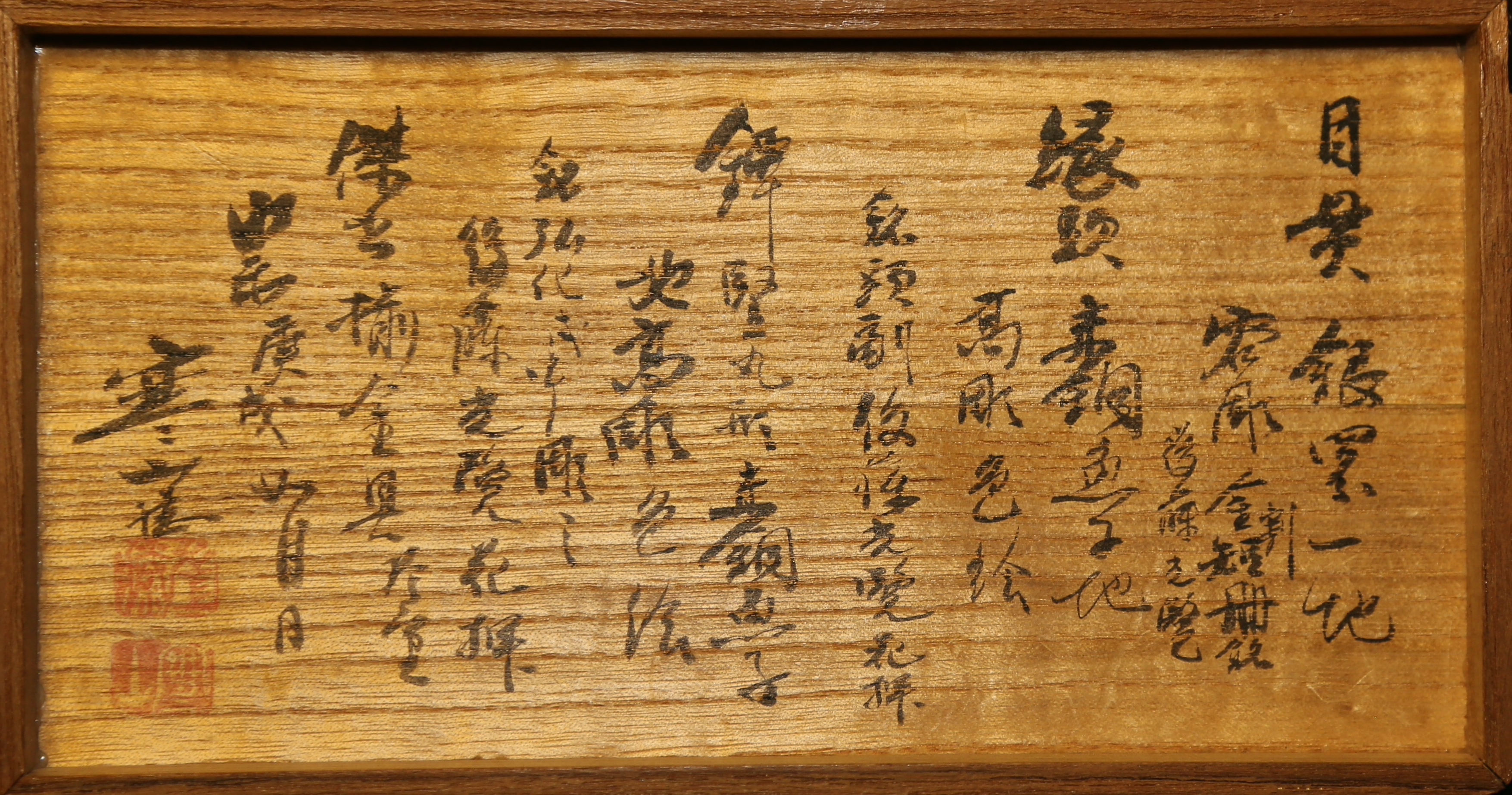 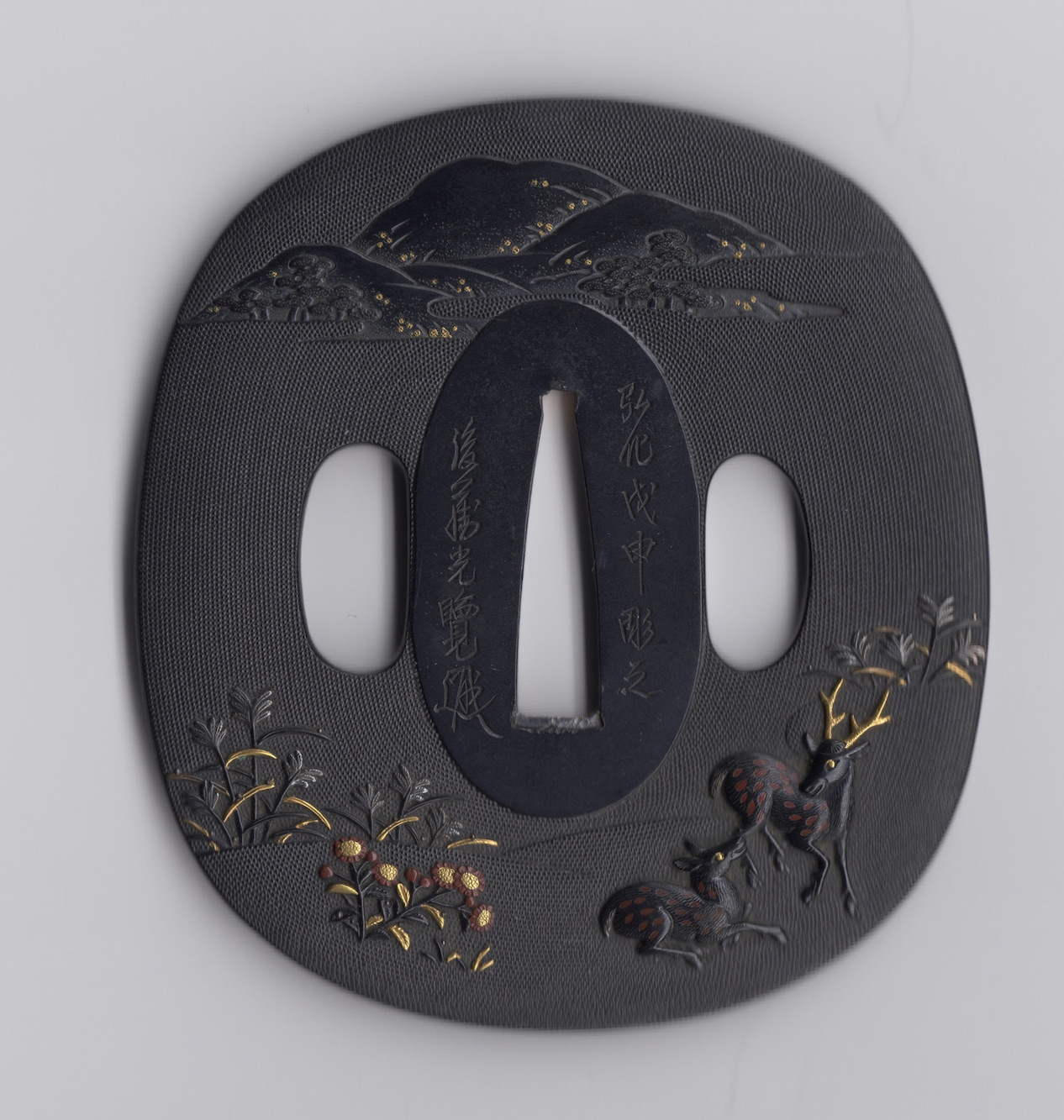 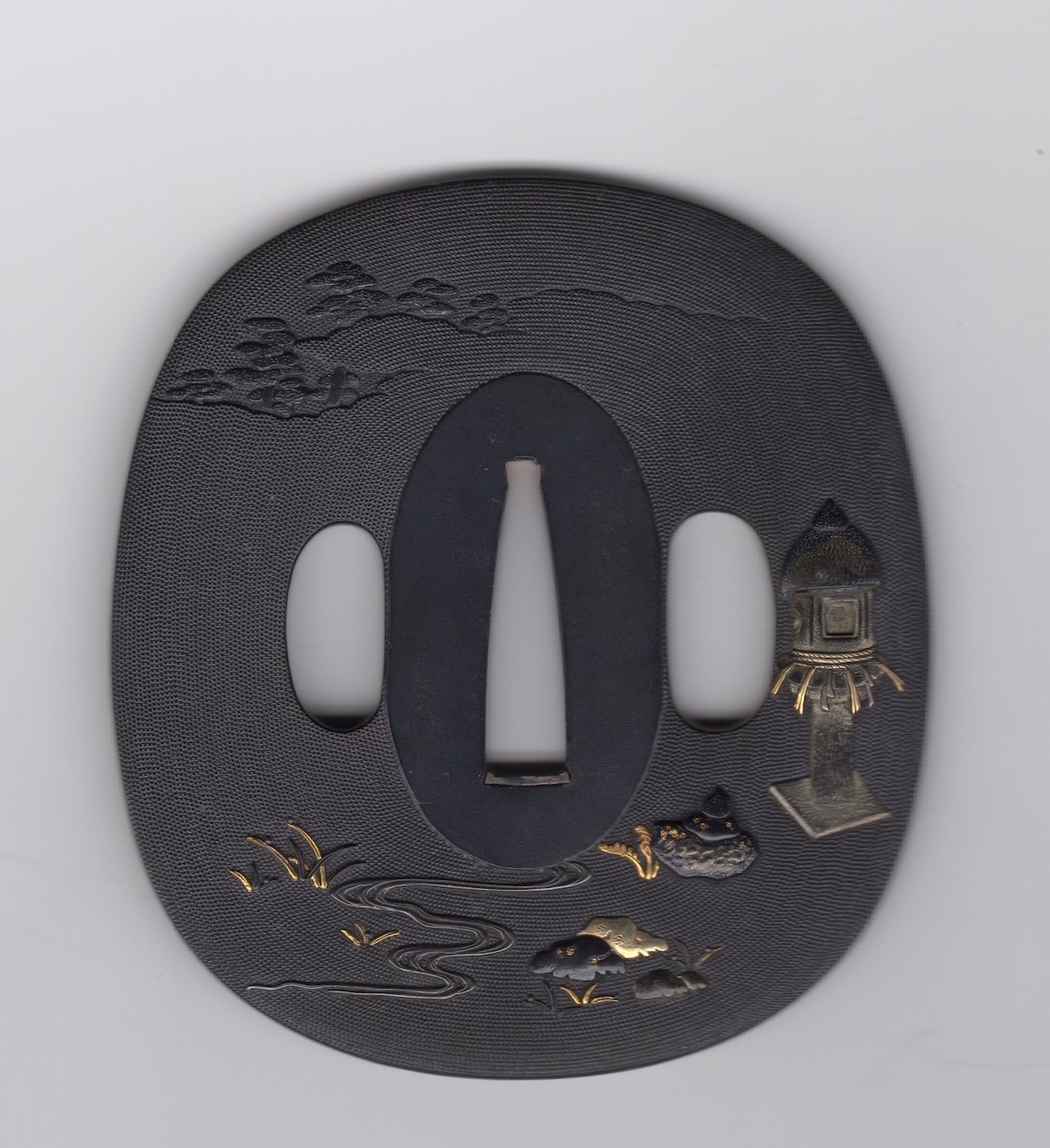 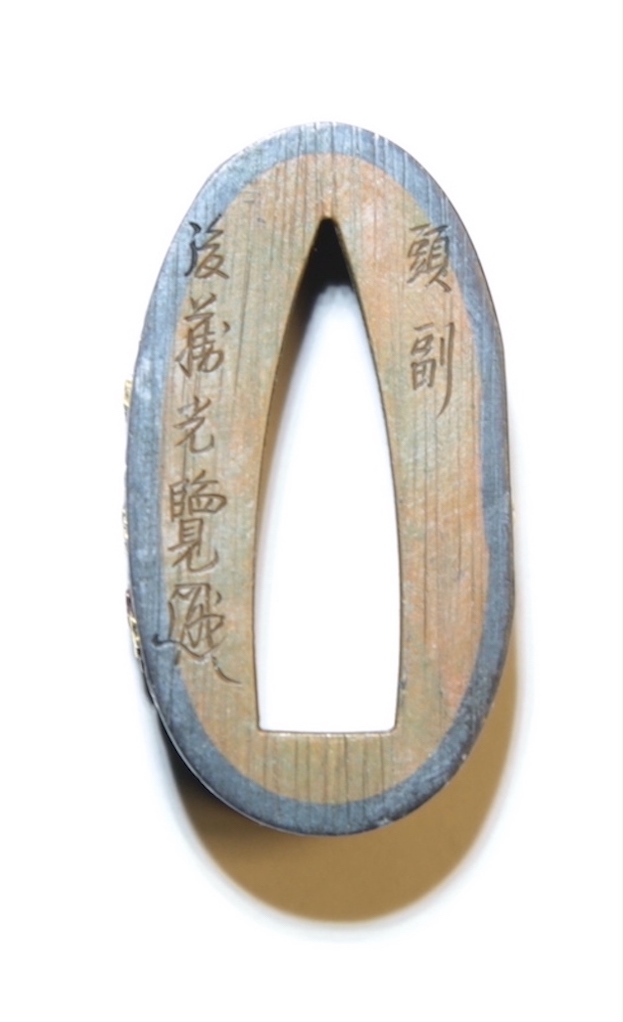 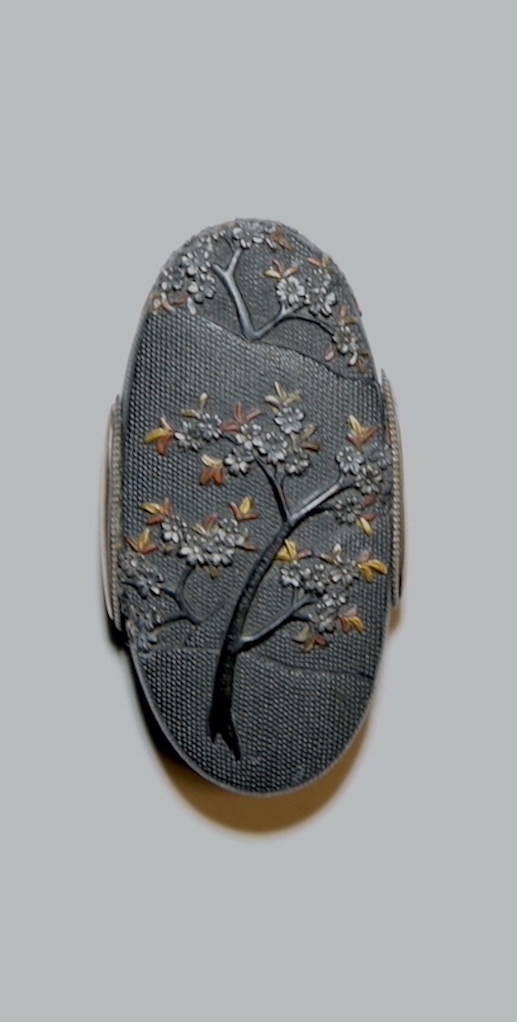 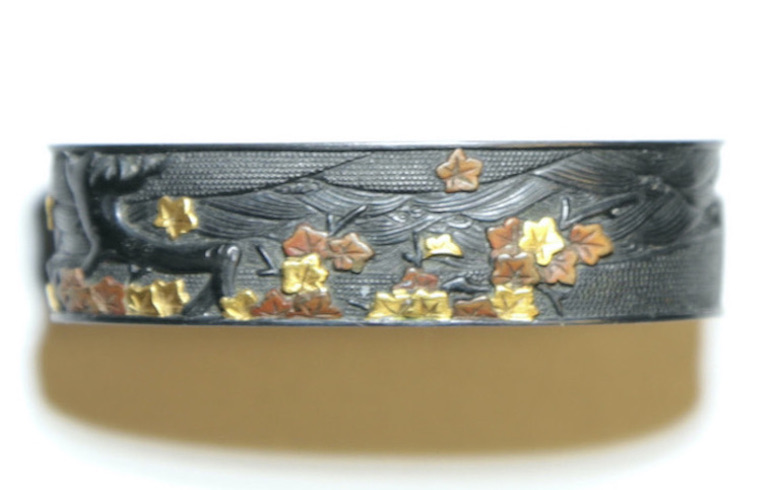 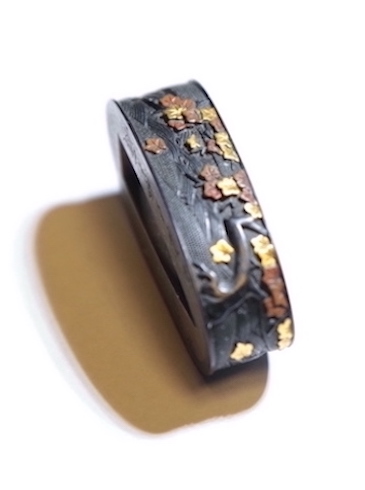 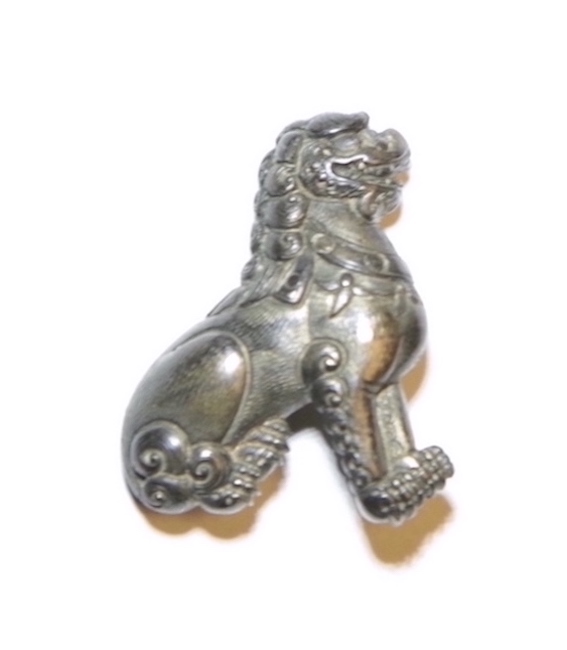 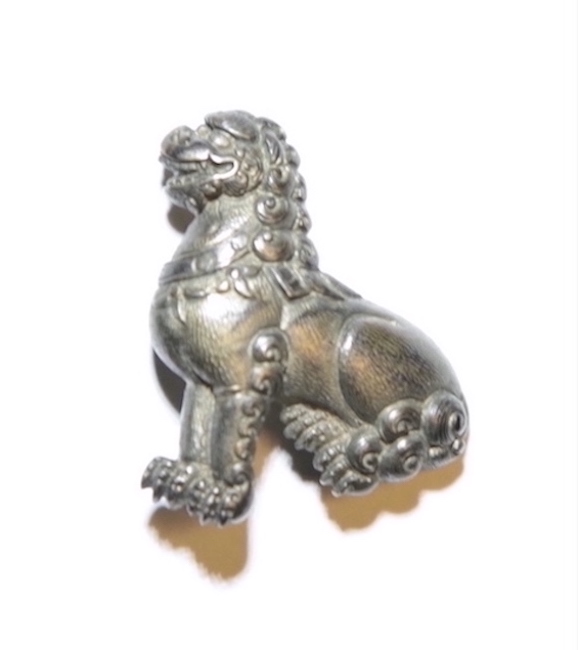 Translations of NBTHK papers were made by Vadim Bushmakin.